Theo is a studmuffin.  Never you mind that he's a gelding, he is a stud! 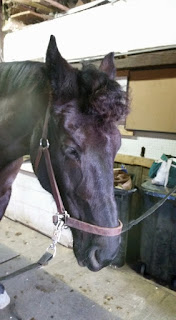 Yes, I am paying good money for this

With spring creeping up on us (three weeks to the equinox!), many of the ladies are in heat.  For a lady's man like Theo, it's a bit of a distraction.  But not necessarily a bad distraction.  While it may be annoying having to manage his extra large personal bubble at this time of the year because he wants to double barrel anyone within range, he can stop traffic with his stud mode canter.  He arches his neck, sits on his butt, and canters across the diagonal with enough purpose and presence to bring multiple instructors to a stop at the same time.

After our rather sketchy lesson on Wednesday, it was a pleasant surprise to have stud mode Theo on Friday.  He was powered up and ready to work.  He was also completely comfortable again after a lot of liniment and body work, turning nicely in both directions.  Aside from the raging hormones, there's also an increasing trend of mi papi feeling like he's just enjoying what he's doing.  He feels good and the work makes him feel good.  In our lesson on Saturday, he repeated his amazing performance even with no mares in the ring.

Trainer A has mentioned that he's a powerful horse that likes to feel powerful.  Not a good thing for a lesson pony, but a hella good thing for a dressage horse.  I want him to feel powerful, confident, and right on the edge of explosion.  I love it.  He's at least two inches taller, light in my hands, and hot off of my leg.  As we keep doing it and I keep rewarding him, he's starting to get the idea that it's okay.  I'm okay with him carrying himself like that.  I will release him and let him stretch out those long legs of his and pet him while he does it.  He can be as powerful as he wants, he doesn't scare me.  I won't snatch at his mouth and make him stop.

There is nothing in the world like sitting on Theo when he collects up and arches his neck because the ladies are watching.  I just get to sit there and look pretty while he stops traffic.

Yes, he's a gelding.  We know he's a gelding.  But we're pretty sure he was gelded late due to his behaviors.  He is very studdish about some things, very mouthy, and very opinionated.  He's not like most geldings.  As far as behavior and handling goes, we usually treat him like a stallion.  It works better.

After two days of being a rocking dressage horse, mi papi needed a break.  The weather cooperated and we got to go on the first trail ride of 2016. 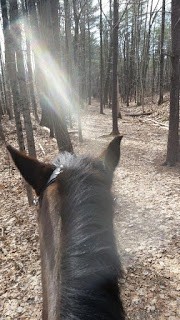 I'm really quite proud of him, since he's not really the best about going out alone and this was his first outing in months.  There was no drama, no freak outs, I didn't have to get off except for a heavy gate I couldn't manage from the saddle.  He stood and let me use a stump to get back on without hassle.  Considering his reputation for dumping people and galloping home, this is brag worthy:


Yes, I'm riding with one hand while I take video of the trails that loop around behind the barn and then hook into one of the local trail systems.  I love riding in New Hampshire.  Even in February when everything is dead, it's beautiful.  Between the trail ride and spending an hour getting his grooming caught up now that I can leave his blankets off for more than 30 seconds, mi papi was completely relaxed.  Tomorrow is his day off, then back to being dressage pony extraordinaire.