Having a horse that's psychic is a total pain.  If it was only once in awhile, I'd be willing to call it a coincidence.  Nowadays?  Mi papi is psychic and that's all there is to it.  Going cross country schooling?  Throw a shoe and go three legged lame, anything to get out of it.  Dressage show?  Better go lame again, but just for the day.  Getting bought by a crazy adult ammy that wants to go play in the sandbox?  Time to show her something all new.

After the teleportation maneuver, I figured Theo had some more stuff to shake out.  The storms weren't done and he was tossing his head.  I tossed his butt on the lunge to let it all out so long as we had the ring to ourselves.  Yes, he had some extra stuff to work through and with a bit of encouragement, did some scooting and bucking about.  Once he was actually going forward, Trainer A spotted something.  Once I wasn't watching his expression to manage the energy levels, I noticed it, too.  He was a bit short on the front left.  Not lame, not even something significant, but there was a little quickness on that step and he wasn't really reaching with it even when throwing in a big trot.  He also had no interest in a big trot, skipping right to canter.

Really?  REALLY?!  I just got your purchase confirmed and you're going to throw me a NQR?!

After evaluating in both directions, we have concluded that the dork actually strained a muscle spooking twice to the left in ways his body isn't used to.  Yes, he spooked bigger than his body is ready to handle and managed to tweak the shoulder he pivoted on.  Some investigation found the specific sore muscles running along the front of the scapula and up to the withers.  Working my fingers into it got him to chew, groan a bit, and drop his head.  Working to the right was pretty good, working left got me a face full of negative Theo which is a bit of a scary beast still.  He was dead serious when he curled, humped his back, and told me to bugger off.  If I hit the wrong button, he was going to unload me with extreme prejudice.  We were able to work through it and get him to stretch where he was sore, but it was right on the edge.

I get the feeling I'm going to get very comfortable living on that edge with him.

After our ride he got a 30 minute body work session on both shoulders, base of his neck, and up to his withers.  It turned him into a cuddly pile of pony goo.  I had my fingers working up to my second knuckle in the muscles of his shoulders.  He was moving a lot better after his stretchy work out and the body work should keep him from snapping back to being tight and sore.  Tonight I'm scheduled for more stretching work, but Mother Nature is having another temper tantrum. 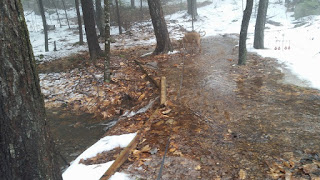 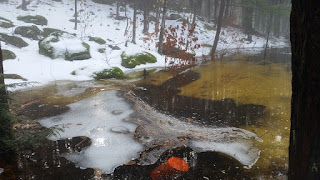 These are from my back yard.  Last night we had a line of severe storms come through and the temperature jumped by 20 degrees.  Snow melt plus over an inch of warm rain?  Property is flooded.  The light area in the bottom picture is where the ice and snow banks used to be, under about a foot of fast moving water now.  Feeding the poultry has been a bit of a challenge with everything washed out.  The upper picture is the bridge to cross our creek.   It's now part of the creek.  We'll see how I do getting off of the property.  Fortunately Theo had a lesson this morning and Trainer A knows what's up with that shoulder.  He'll get out and stretch regardless of my need to build an ark.