Poor Theo was a bit sore after the chiro adjusted him.  Nothing too drastic was found, no red flags were raised, but he did have to have some adjustments.  He needed to have his withers adjusted, his right shoulder, and left haunch.  He'll have another appointment in May to make sure the adjustments stay put, then he'll be a once a year type of a boy.  Nothing too rough, hooray!

Doctor's orders were to have a light day, so Trainer A and I decided to do a mental training day.  We set up some obstacles to work on his bravery and did some work on his turn on the haunches.  It took some careful timing and coordination between me and Trainer A to get where we needed to be with the turn on the haunches.  Papi has some sort of mental block on moving forward when under pressure or moving his shoulders.  We would work for about five minutes, then release him to go do obstacles, then repeat.  By the end he had the idea and was stepping around with little assistance from the ground and a lot less frustration.  I knew he had the idea when he quit locking onto the bit and trying to force me to take pressure off of him.  He doesn't handle confusion and frustration well.  It took a lot, lot, lot of petting, cooing, and purring at him to make it through the lesson without an explosion.  Totally worth it.

For one split second, he stepped completely under himself and lifted up like he might rear, but instead stepped around his right hind.  I think he might have a knack for pirouettes.  It was a very cool sensation, feeling him completely move his weight to the haunches and lift his forehand up with his back so he could move it sideways.  It was just the split second, but hey, that's how all of the fancy moves start.

The obstacles went quite well.  Using painter's tape, the pool noodles were stuck to jump cups, making them adjustable for height.  We started with them ankle height, then worked our way up till they were bumping his belly.  He was very confused at first, not sure if he was supposed to jump them or what, but he got the idea pretty quickly.  He tried pushing them out of the way with his nose, but they sprung back to thump him.  Other than some hesitation and some twitchy skin on the first couple of passes where they touched his belly, it didn't bother him at all.  Food motivated horses are fantastic.  When given the choice between cookie or death by pool noodle, he always chooses cookie. 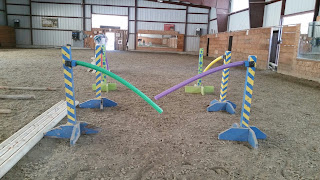 Trainer A said 'you're so brave, Theo, I never thought I'd say that'.  I tried to get some video of him pushing through the noodles but, in typical Theo fashion, he didn't want to cooperate with the camera.  You'll have to take my word for it that he pushed through lots and lots of noodles today.


I also snapped off a conformation picture, since it was warm enough to dilly dally with no blankets on.  54* out today. 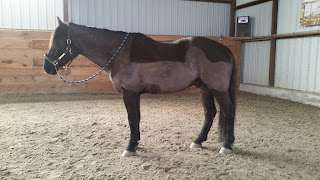 Just look at that lovely dressage pony.  The neck reshaping is going well, the bottom getting more even and the top filling in.  He's also quite a bit bigger behind the saddle.  He's actually taller over his hip now and wider from hip point to hip point.  He fills his blankets in more.  I feel like I should start taking measurements. 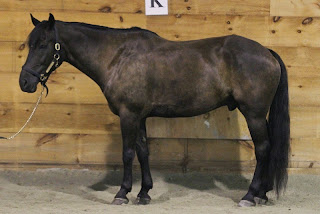 I have to look twice to see that he's the same horse in these pictures.  He just looks more symmetrical and yet more curvy.  In a good way.  Pony has some junk in the trunk.