I swear there's a conspiracy keeping me from working Theo the way he needs.  I think he's paying people off.

Friday he got off because of the chiropractor.  That makes sense, even if I didn't realize he was going to have that day off.  Saturday was a very light work out, though we had a very useful breakthrough on the turn on the haunches.

Sunday I had a date.  It was supposed to be a lunch date, but it ran late and by the time I got back I only had enough time to swap out Theo's blankets while wearing a dress.  And heels.  And lipstick.  Believe me, I got some double takes when I walked into the barn.  Fortunately I had some spare boots to wear when I got mi papi out of turnout and hubby was willing to help me pull his muddy blanket off so I didn't have to do it in a nice dress and my good coat.  Fine, fine, a day off, but it's all in the name of love and he'd just work on Monday instead.

On Monday I went to start my car and nothing happened.  It made a grinding sound and made no attempt at starting.  WTF now?!  With the hubby traveling for work and having no close neighbors, I had to scramble a bit to find a way to jump start my car.  A couple of phone calls revealed that we do, in fact, have a battery charger I could plug into the wall and then hook up to my car.  Great, got the car started, but far too late for me to make it to the barn.

After this string of events, I woke up this morning expecting to find that I was missing a leg, my car was stolen, or Theo had run away from home.  I spent most of today in a state of paranoia.  It wasn't until I was at the barn (with both legs accounted for) that I felt safe expecting to ride.

That much time off and a storm blowing in?  Theo demonstrated his new strength and balance with a teleport maneuver when someone went through the trees at the end of the ring and surprised him.  I was about 1/3 of the way down the ring before I realized he'd spun and bolted. 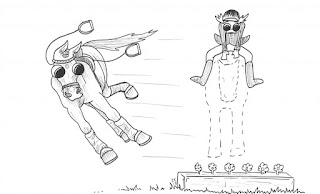 I guess it's progress that he was letting it all out and let me burn energy with a big trot rather than stomping his feet like a pouting toddler.  The other riders in the ring did not approve of his choice.
Posted by Catie at 5:31 PM