Ode to the lazy horse

It's now December and with the cold weather comes the sassy ponies.  Having ridden TBs for so many years, I'm very familiar with lunging in winter and using Saddle Tite as needed.  So long as you go into it knowing what's up and being proactive about it, it's not a big deal.  It's a much bigger deal when you're in the ring with those that don't yet know how to handle cold weather ponies.

The sassy was at epic levels last night. 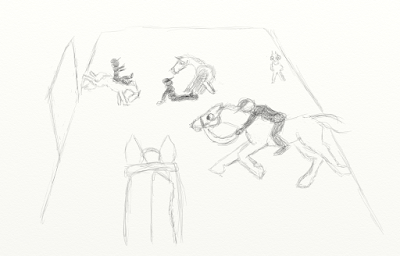 Welcome to the winter indoor

Mi papi has been going on the lunge regularly but not for sassy reasons.  He just needs the work on transitions without my tush in the saddle.  I can more clearly see when he's being ploddy pony and when he's really reaching.  It also helps his canter since I'm working on the idea that he should keep cantering until I say otherwise.  In the saddle, I'll start poking and nudging and helping without realizing it.  On the ground, I'm aware of exactly how much I'm helping.  I'm weaning him down to zero.  So he spent about fifteen minutes on the lunge while we discussed going forward promptly when cued.  He gave me one moment of sass when I got after him, but nothing bad.  He was in a friendly, playful, rather affectionate mood and submitted easily.  I halted him, gave him a cookie, and headed over to the mounting block.

That was when everyone else decided to show up.  One young lady was riding the new four year old, with no stirrups, and didn't lunge.  I strongly suggested she hop off and lunge first, judging by the angle of his neck and his wide eyes.  Turns out she's not experienced at lunging.  So I'm trotting around on Theo on the other end of the ring when I hear slamming hooves and 'whoa, whoa, WHOA!'.  I immediately braced for the matching tension and explosion from my mount.

Nothing.  He flicked an ear, but that was it.  Well, okay then.  Don't I look foolish.

It didn't matter what the youngster dished out, Theo didn't care.  He had his own business to manage, like the new concept of ten meter circles at the trot.  The teenagers continued to try to manage the frisky four year old and a lesson showed up.  One of the best lesson ponies in the barn, but when it's cold, she'll latch on to other horses and canter off with her rider.  She gave a little snort and I decided cantering was out.  I didn't want to be responsible for a mark on that wonderful pony's record.  The four year old settled with Trainer A's authoritative voice telling him to knock that behavior off, I did my shoulder in work at the walk, and peace reigned for about five minutes.  Then the TB gelding with the space cadet owner showed up.

He's blind in one eye and she can't lunge him.  She thinks he's very sweet and well broke, I'm not so sure.  Her ring craft is very spotty and she'll crowd people without thinking too much about it.  I was doing my lateral work, leg yielding at the trot while watching in the mirror.  She started doing the same thing without watching for students on the rail.  Then she tried cantering and it turned into a damn rodeo.

Theo stood there, watched with one hind leg resting, and thought that looked like a lot of work.

The ring was just buzzing with tension between the four year old, the TB, and just the fact it was crowded.  Theo never tensed up.  It never occurred to him that he needed to participate.  It was hard enough doing a side passe, he didn't have the time or energy to do anything else.  After getting a quality leg yield to the right, I bundled him up and took him back to the barn for all the currying and affection he could handle.  It is such a relief to know that when nonsense like that is going on, he sees no need to get involved.

There are benefits to riding a lazy horse.
Posted by Catie at 8:30 PM