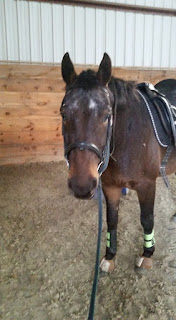 Tuck, (or Tuckaronni, I take the blame for that one) is the four year old appy that I mentioned that managed to bite someone's finger recently.  He's been my partner for a couple lessons while I got Theo's feet sorted out (which happened today! but that's for another post).  Trainer A and Trainer R evidently had a talk and decided that he was the one that would teach me the best habits.

I usually call him baby pony as a reminder to myself that he is, in the end, just a baby.  He doesn't currently canter under saddle, he's that green.  I haven't ridden a baby in a long while, so it's good for me.  There are some basic differences when working with a horse that's both green and young.  You expect a short attention span, very distractable, and a lot of question marks.  You also have a very soft touch with corrections, since you're usually working with confusion as opposed to learned defiance.  When he decided to baulk and not walk down to the ring politely, my correction was "Don't be so four!"  What else can you say to a baulky baby?

Baby pony knew just about zero when he showed up.  He was supposed to be a barrel pony, so that's all he knew.  Gallop and turn.  Trainer A got him going at a trot and it turns out he has a fantastic brain.  Many of the teens are now cleared to ride him at the walk and trot.  He's solid on the trails and was a saint on his first trip to the beach, even when galloping with a group.

He also has a freakin' ridiculous trot.  He's a stereotypical down hill appy that stands about 14.3, but his trot stride is as long as Theo's.  He shares trot pole sets with mi papi and Miss Thang.  They're the only three in the barn that can handle trot poles set long.  Miss Thang is about 16.2 and Papi is about 16.1, for the record.   He's so loose through the shoulder and back that it's ridiculous.  It's no effort for him to stretch out another 6" through the shoulder and make a distance work.  He wears bell boots due to his combination of downhill build and big overstep.  The first time I got on I felt completely lost.  What the hell was going on with this pony and all of this movement?  Just walking around as a green bean, he had so much movement through his back, hip, and shoulder.  He's going to be a hard core toe flicking monster when he's strong enough to fight against his conformation and sit on that beast of an engine behind the saddle.

If his conformation was anything near a horse that could do collection, I'd be tempted.  Very tempted.

The first time I rode him, I was pretty unnerved.  His body wiggles and wobbles all over the place.  Three horses had taken off with riders already (cold snap after the heat of Christmas) and two riders had fallen.  Not my favorite day for meeting a new four year old.  Trainer A was trying to manage Juice Box who was on his third hour of riding after dumping a little girl and was still jigging.  After letting us get to know each other, we went out for a trail ride/trot set.  He was lovely, aside from trying to chew on Juice Box's tail.  It made me much more confident in him.

Today we had lesson #2.  With the recent snow and ice, everyone had to stay indoors.  I tossed the baby on the lunge to start with due to him being very busy on the cross ties.  Turned out to be a good call, he ripped a couple of big bucks.  I did notice that the athleticism does translate to bucking potential.  Hurk.  But with a couple out of his system, he went to trotting with his nose in the dirt.  I hopped on and we had a very productive ride.  He's still learning to step off of the leg and he gave me some of his first steps of leg yield at the walk.

The reason Trainer A and Trainer R put me on him was because he gets offended by busy hands and likes a rider that really sits on him (hello, former barrel racer).  For a rider that tends to perch and play with the reins, it's a good lesson.  I had to ask for those downward transitions from my seat or get a four year old reaction with bracing and neck twisting.  Since he's also naturally forward, I didn't need to worry about pushing him along, I could really focus on preparing for and riding the downward transition.  It worked, since I was able to isolate the parts of my body I use for sitting trot, sitting heavy, and transition down.  It was a very interesting revelation for me.  The sitting trot requires most of my core, giving me stability (the bear down from the Mary Wanless clinic).  The heavy sitting feels like I'm pushing my center of gravity down around my hips.  While sitting heavy, I resist right around my diaphragm, front and back.  Boom, walking.  A big exhale helps.

It wasn't the muscles I thought I was supposed to use, so that was a breakthrough for me.  I think it's going to help me with Theo.  Not that he struggles with downward transitions.  He quite loves them.

Trainer A suggested that I sprinkle in some lessons with baby pony to keep pushing forward with my progress over the last two lessons.  I think I'm on board.  He's fun to ride and is a completely different beast.  After I put him away, I had mi papi on the lunge.  Theo is a completely and utterly different animal.  He's built to take weight back and push.  Baby pony is going to be someone's bff and win everything in low level eventing while Theo and I chase that Bronze.

Some little girl is going to be very, very lucky.
Posted by Catie at 4:56 PM