While I'm not big on crazy Christmas celebrations, I do have a tradition of getting something for the horse in my life.  My dogs get presents under the tree, I buy things for the trainers, I even give stuff to the hubby, you better believe Theo got something. 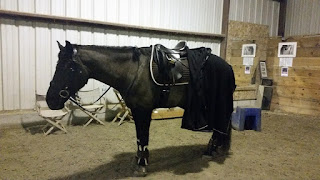 Lookin' like a model in his dressage duds, including his new pad and boots

He got a new saddle pad and set of boots from PS of Sweden.  And a bag of cookies, which I suspect is the part he really wanted.  He snorfed those right down, had to keep an eye on my fingers.  Someone got nipped by the adorable four year old appy at the barn this week while feeding a treat and I had to help bandage her up, I'm keeping an extra close eye on my digits.

I love the chocolate color on him.  The champagne is still my favorite, but this is a close second.  I know he looks good in the royal blue I favor, but there's just something very elegant about him in neutrals.  Even if the neutrals are a shiny croc print boot.

My other present to Theo was the lack of my presence for an extra day.  I zipped out to swap his blankets out (67* for a high today, wtf) and give him some cookies, then left.  Our lesson on Tuesday was very rough and I figured a couple days off was what we both needed.  I'm not sure just what had him so stuck, but Trainer A didn't take the pressure off and we had to push hard to get through the canter exercise.  It might have been the pouring rain with some thunder going on, the wildly swinging temperatures, or the fact I nabbed his dressage saddle.  He's bulked up and I'm suspicious of that saddle's fit.  I won't be using it again.  I'll just stick it out in my close contact saddle until I have his new saddle purchased.  I don't think it's screwing up my position too much.

On the bright side, he was very happy to see me.  It's been awhile since I had a horse greet me with a tossing head and invitation to come play.  I had to find his halter (AGAIN), so he trotted around behind me, tossing his head and snorting.  I couldn't bring myself to encourage him in his shenanigans with the very slippery footing, but I did push him around and play for a bit.  Maybe when things dry out we can play tag for real.  I know playing tag with a horse is wildly dangerous, but I miss playing games with my Hellbeast.

Tomorrow is supposed to be 60* and clear.  With any luck, I can get my Christmas pics with Theo out on the trail.  Global warming sucks, but I'll enjoy what side effects I can.
Posted by Catie at 10:30 AM