It had to happen at some point, considering I live in New Hampshire. 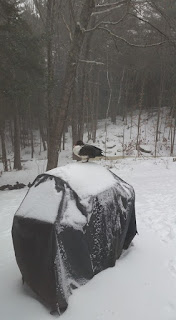 One very displeased duck
We only got 3-5 inches, but it was mixed with sleet and freezing rain so I'm staying off the roads.  First storm of the season is when the loons come out and everyone forgets how to drive, even in northern New England.

You really do have to have a cup of Dunks to qualify as a New England driver.  The addiction is unhealthy.

Unfortunately the ice has thrown everyone's schedules out of whack.  My lesson was rescheduled for tomorrow since I live on a dirt road that's the last to be plowed.  The farrier has no idea when he'll be out, looks like it will be tomorrow morning since his early appointments got all screwed up today with the ice.  Sigh.  Theo's been out for a solid week now.  I was out swapping blankets yesterday and he was beside himself, dancing on the cross tries and begging me to play with him.  I'm having to keep a close eye on those teeth.  It's clearly play behavior, but that won't make it hurt less if he gets me. 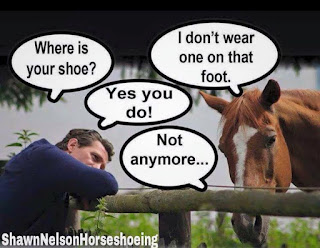 He better get that shoe on tomorrow or I think he's going to explode and leave a mess on the walls of his stall.  He can't even go in turn out until his winter shoes are on now that snow is on the ground.  That first round on the lunge is going to be a wild exercise.  I may have to get Trainer A to take video.