So much for Theo not needing lunging to lower his sass levels.


On Sunday we took advantage of global warming and went for a nice trail ride.  It was 55 degrees out and sunny in December, we had to seize the opportunity.  It was only 30 minutes and pretty much no real work, but it was what he needed.  Ring sour Theo is not a good Theo.

Monday he got the night off since I had to actually do work stuff.  Ugh.

Today the temp dropped, the wind picked up, and I found mi papi in turnout, goading the other ponies into being naughty.  I led him in with him tossing his head and telling me what a stud he is.  At least he's honest about his moods.  I slapped his butt right on the lunge line.  He plodded around looking totally chill with life, no big deal.  It was almost enough to lull me into the saddle, but I'd seen this trick before.  I asked him to canter and suddenly I was flying a kite. 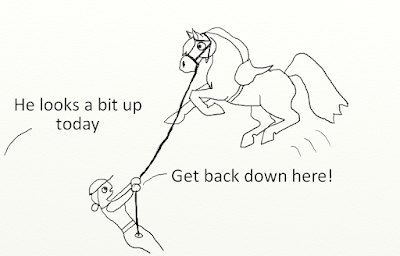 Trainer A called him a drama queen as he snorted and plunged and trotted around in a ridiculously suspended way.  It took about ten minutes on the lunge before he went back to plodding around contentedly.  I am so, so glad that I decided to lunge him first.  Gymnastics with bounces, one strides, and changes of lead are not fun when horses just can't deal with their own energy levels.

After the lunge and a jumping lesson, he was a big goofy ball of cuddles.  He felt so much better.

We're going to be in the fifties again this weekend.  Climate change is bad, but it's so much harder to be angry about it when I can go trail riding in just a sweatshirt.  In December.  In New Hampshire.  I'm sure we'll be paying for this come February, but in the mean time, I will be flying my kite outdoors as much as possible.
Posted by Catie at 4:14 PM