Meet the other half

Like a lot of adult riders, I have this other person that lives in my house that does not get the whole horse addiction thing. 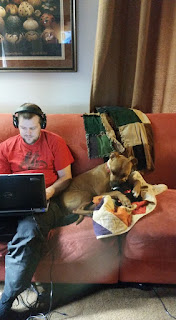 The hubby and his pet dragon, hard at work as a computer engineer.  Yes, he also works from home.

This is the hubby.  We've been married for fifteen years.  Before he got involved with me, horses were those big things in fields or on TV.  Poor sucker had no idea.   He did grow up in rural Wisconsin, including some time spent working in a dairy farm, so at least he wasn't completely unaware of life with large herbivores.  He just had no idea what it meant to be married to a competitive rider.

We got married in college and it wasn't until after I graduated that I got back into riding.  Once a week lessons, no big deal, right?  Ha.  I was suddenly gone for large stretches of time and would come home sweaty, disgusting, and exhausted.  I was also perpetually broke.  He's a good sport so when I offered to buy him some lessons, he learned to ride.  He got far enough to learn to canter and even pop over cross rails with his good buddy Bruce the Belgian.  They were a funny pair, doing their own thing at the show h/j barn where I worked.   He had no interest in equitation or competition, he just liked galumphing around with Bruce and Bruce liked galumphing around with him.  Bruce was the kind of horse that made the earth shake when he cantered by and rode like a couch.  I really wish I had gotten some pictures of them.

The hubby was infamous around the barn for being unflappable.  He got caught between two fighting horses and got a glancing kick his first lesson, didn't bother him and he was pretty impressed with the bruise when it showed up.  When Bruce wasn't available and school horses were short, they tossed him on a complete jerk called Cosmo because 'he'll be fine'.  Cosmo dove off the rail and ran an instructor down, but the hubby hung on and pulled him up, completely unfazed.  His first canter was because Bruce was passed by a couple of cantering horses.  His reaction was 'huh, smoother than trotting' and just went with it.  He was declared fun to teach because nothing rattled him.

Eventually he got tired of the commute and endless circles and gave it up.  It just wasn't for him.  If funding had been available, I would have bought Bruce for him and they would have galumphed together out in the open happily with no more lessons on 'heels down, chin up', but it wasn't to be.  These days he only rides occasionally.  I took him for his very first trail ride this fall.  We put him on the bambino and sandwiched him between Trainer A on Juice Box and me on mi papi.  He was as safe as a babe in a cradle.  The bambino took full advantage of his lack of trail experience to snack the whole ride.  Look close in the picture and you can see the huge wad of leaves he'd collected. 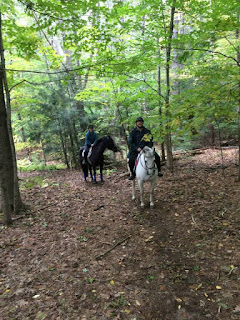 Out adventuring on the trails with his new equine BFF

Hubby's a good sport.  He's accepted the massive bills and long hours that go with horses with limited fuss.  He watches my horse videos and has picked up enough to have constructive criticisim.  I was watching a World Cup for dressage video last night and after Isabell Werth's ride, he shrugged and said 'so how is she cross country?'.  He wasn't a big fan of Satchmo, though was impressed that he managed to kick the foot of his rider while she was still in the saddle. 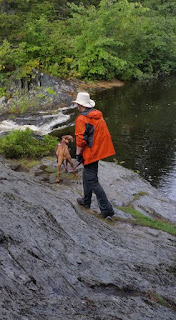 Hiking with the dragon during our fifteenth anniversary vacation
This is the same guy that saw his first Saddlebred in full pads and announced 'hey, that's for navicular, right?'.  I was so embarrassed, shushing him and telling him he can't say that about other people's horses.  To be fair, the Hellbeast had just been put in fancy wedge shoes for his navicular issues, so he had a valid comment.  Just not something you should say about someone's show horse.  He didn't get it.  Why else would they have pads like that?

While I'm out managing Theo's work schedule and fussing over him, hubby takes care of stuff around the house like chicken pasture maintenance, building a bigger pond for the ducks, and creating all sorts of stuff like furniture and coops.  He does come out to shows to tape on occasion, but I'm impossible before I compete and he stays far away.  I did try to strangle him once in a warm up when he tried to give me advice.  Seriously, tried to grab him while I was in the saddle.  It was not a shining moment in our marriage.  People frequently ask me why he doesn't support me more, and I say it's for his own health and safety.  He supports me, just far out of reach.  We have a rule that as soon as I'm done with cross country, I have to text him.  He knows my ride times.  It keeps him from worrying.  The first show he saw me at I went under a horse's hooves, so he knows how dangerous it can be.

I asked him if he wanted a husband horse of his own and he said no.  He likes to visit and go on the occasional trail ride, but he knows he won't make the sacrifices I do.  It's not a passion for him.  Horses are nice and he likes them (and they really like him), but he'd rather build things and take his beloved dragon out tracking.

Considering he had no idea what he was getting into, I'm very grateful that he's learned to live the life of a horse husband.  It's not a life for a lot of people, but he handles the trials and tribulations well.  He understands that there are certain phone calls that I will always answer and that I may be racing out the door in an instant.  He's the one that drove me to the barn when Allen broke his leg because he didn't trust me to drive in that state.  He covered for me when Fi was sick and I raced out the door with no warning.  He's been through two horses with me so far and he's bracing himself for number three.

At least he knows what he's in for this time.
Posted by Catie at 8:22 AM