Fun fact of the day:  Theo and I both like tangerines 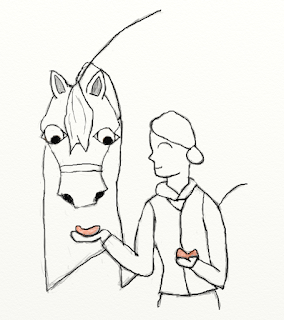 Trainer R was unloading some groceries and mi papi could not keep his nose away from a crate of tangerines while we were talking.  The trainer gave me one to see if he liked them.  It was a big success and we ended up sharing the tangerine while walking out after our lesson.  Theo was at least nice enough to not mug me for my half.

Walking out after our rides has become quite the ritual with Theo's full winter coat in.  It takes me an hour or more to get him dried out after a ride, especially along his incredibly fuzzy neck and shoulders.  After seeing the condition he was in after today's lesson, I got permission from Trainer R to turn his trace clip into a blanket clip and get all of that fuzz off of his neck.  I just ordered two new neck rugs to keep him toasty warm in turn out.  He's such a princess about being cold, but his work load isn't going to be decreasing any and it's going to be hell trying to get him dry with temps below freezing.

Today's lesson was all about balance with leg yields in all three gaits and counter canter.  I guess it's not a surprise he was pretty sweaty after all of that.  The two previous rides included extra canter work since he had a pretty decent case of being overly energetic and they both left him a sweaty disaster area.  His extra energy is fun to ride for me, but not so much fun for other people. 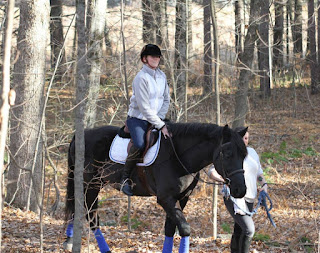 Theo and I working his day job as a lead line pony at a ladies day out event.  Rockin' the blue polos.

We're also bumping up his grain since he's dropped some more weight and is adding on muscle.  While a lot of the horses are downshifting as kids stop their lessons for the winter, Theo is still adapting to his new reality of going forward, using his topline, and lifting his tummy.  New muscles are coming in and he needs the protein.  He's also been swapped from a general anti-oxident supp to a muscle support supp with extra lysine.  I think we can officially consider Theo to be a horse in moderate work as opposed to being a plodding lesson pony.

He's going to be an entirely different horse come spring.  I can't wait.
Posted by Catie at 5:44 PM