Warm me up, Scottie! 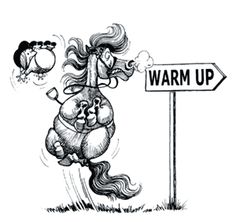 The picture has nothing to do with anything, I just love Thelwell ponies.

Theo taught me an important lesson last week when I was late for a lesson:  do not rush the warm up process.  I tacked him in 10 minutes instead of our usual 30 minutes snuggle and groom fest, then rushed his long rein gradual warm up.  He punished me by falling so far behind my leg that I was wheezing just trying to canter while he braced his neck and did his impression of a llama crossed with a snail.  It was a jumping lesson.  The rails were a flyin'.

Today I was late again.  I couldn't find my phone anywhere and I really don't like to head out in the middle of the day without it.  My work email and meetings go to my phone, so they can still get a hold of me.  Corporate America is a cruel, cruel mistress.  By the time I found it and escorted my neighbor's elderly German Shepherd out of my driveway and back to the safety of her own yard, I was looking at another 10 minute to prep lesson.

I may not always get it right on the first try, but I sure wasn't going to have another lesson that involved me pony club kicking and using a dressage whip while heading to a one stride.  Ha ha ha, no thanks.  I swapped in boots for my usual polos and didn't completely brush out his tail, but I still made sure that mi papi had the appropriate currying and ear rub time.  I made sure to tighten his girth in the usual three steps process spread out over ten minutes.  Better to be late to the ring than to have Theo demonstrating why he has such a bad reputation.

Trainer A saw me heading down late and told me to just start long and loose, she'd be down soon.  This was clearly Trainer code for 'you remember last time, don't screw it up again'.  I spent the usual ten minutes trotting and cantering on the buckle, starting with a jog trot that a western pleasure pony would envy.  Experimentation has shown that trying to get him promptly off of my leg at the start just pisses him off and, guess what, he's a big, powerful horse to be ticked off at me.  I've accepted the fact that when I start my warm up, we look ridiculous.  It's embarrassing at the dressage outings.  He trots around with his head down around shoulder height, on the buckle, and about as fast as molasses in January.  It takes ten minutes of trotting with gradually increasing energy with some bursts of canter to get him thinking forward enough to pick him up.

Today I was late, but I didn't skip the steps.  25 minutes after getting him out of the field and fifteen minutes after when we were supposed to start, Trainer A joined us and we got to work.  His ears were pricked, his neck was relaxed, and he didn't tell me to f*** off even when asked to really try hard.  He chewed the bit, sat on his butt, and side passed beautifully.  He lifted his back enough that I could sit the trot, which was wonderful since Trainer A has confiscated my stirrups for the month.  It was a huge step in the right direction and told me pretty much all I need to know about what's important for Theo.

I think I've settled on this adorable little guy as my tortoise tattoo. 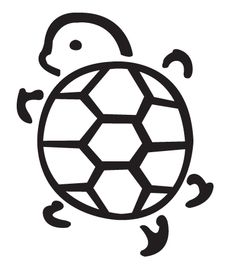