After my Tuesday lesson, a certain wooly mammoth looked like this: 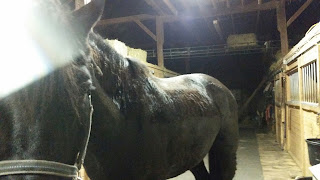 Fuzzy wuzzy was a bear

It's a good look for a Bashkir Curly, but not for a Percheron cross.  It finally sold me on the idea of clipping him again, despite the concerns about him being able to stay warm.  I thought I'd be able to do a quick pass on his neck and then taper it into the clip he already has, but when I started clipping, I realized the 'clipped' area was now a winter coat to rival almost every other horse in the barn.  I had to clip Theo all over again.  Can you believe this all came off of a horse that's already been clipped two times this fall? 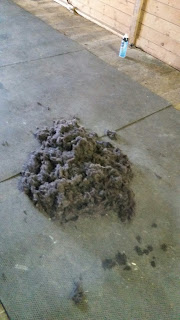 Note the spray can of Cool Lube in the background for scale, it's ridiculous

No kidding I wasn't able to get him dry after a ride.  I found wet spots in his coat two hours after I rode him while clipping him.  I definitely made the right choice taking all of that excess off of him.  He was thrilled to have his neck scratched with all of the fuzz gone. 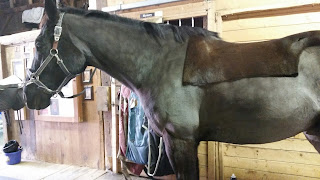 Hey, there was a horse under all of that fuzz!

I think he lost twenty pounds from hair removal.  But after my lesson today, I was able to dry him out in about twenty minutes despite the fact it was 45 degrees out and he did some solid work.  With all of the natural insulation removed, I had to seriously up his artificial insulation. 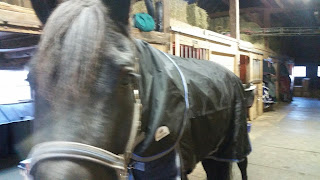 Someone has been standing still for hours and is ready to leave, with or without me

He's now in an Ultimate Turnout from Smartpak with a neck rug in medium weight.  220g of fill works for these mid-40's temperatures and he's completely covered everywhere that he's clipped to keep him dry.  He seems quite happy with the situation and there's a heavy waiting for when the temps actually get down to the real winter ranges.

Our ride?  Oh, how did our ride go?  Someone's learning how to lengthen his stride in cavaletti work and Trainer A was very pleased with his good attitude and stretch through the shoulders.  There were several moments when I felt like I had a nice, balanced, forward athlete as a partner.  It's a new feeling and I love it.  People are starting to notice Theo when he works.  I blame the topline that's starting to come in.  Super sexy.
Posted by Catie at 2:54 PM