I took mi papi out to a hunt pace yesterday to celebrate the end of the season.  It was the Myopia Hunt's pace and my favorite of the season.  The route is always gorgeous, the jumps are inviting, and we always enjoy ourselves.  Our company consisted of Trainer A on Juice Box the pony, a 10 year old on her opinonated pony, Miss Thang with a junior rider on her first hunt pace, and another teen on her experienced eventing mare that I'm dubbing Saintly Mare.  I love that Saintly Mare.

Miss Thang decided to show off her dressage moves with piaffe, passage, canter pirouettes, and basically anything that didn't involve walking or trotting in a straight line.  The pony carting around the youngster was also prone to bucking and taking off if he thought he could get away with it.  Fortunately that young lady has the guts and seat to handle him and actually had a great day and jumped lots.  She had her first three phase last weekend and has decided she's going to be an eventer.  Judging by how her hunt pace went (and the fact she jumped absolutely anything we let her have a shot at), she's going to clean house in a couple of years.

Theo was . . . well, Theo.  He was assigned last in the line to start because Miss Thang needed to be behind a pony that could be used as an emergency brake system (Juice Box).  The opinionated pony had to go in the middle to keep him happy.  No one considered putting the eventing TB mare at the end, so mi papi ended up last.  He did fine up until we had to spread out to jump.  He was left behind, then trotting after the others to catch up.  The naughty pony bolted and Theo hit his threshold for keeping a lid on his temper.  He's got a big buck when he's upset.  It wasn't dirty and I sat it without even losing a stirrup, but it was unnerving.  I forget sometimes just how strong he is and that I ride him in a D ring snaffle.  After a couple jumps, I announced I wasn't doing any more obstacles because Theo was getting more and more upset with being left behind and he was going to unload me after one of those fences.  Trainer A told me to get out in front, jump stuff, and enjoy myself.

I shrugged and sent Theo out in front with Saintly Mare right behind us to go jump and canter ahead of the group.  He immediately calmed down and gave me a very pleasant feel cantering out to the next field.  He still eyeballs the fences and sucks back a few strides out, but once he understands we're supposed to go over them, he's happy to oblige.  It just takes him a couple seconds to get a good look at them and check for goblins.  Very inexperienced.

Turns out that mi papi actually likes the Saintly Mare and we ended up sharing the lead for the rest of the ride.  We did long sections of trot and canter with them side by side, getting to stretch out and leave the ponies behind.  With Saintly Mare to set the pace, we were able to canter briskly down the road with no kicking and happy, pricked ears.  When he started to fuss because we were getting passed, I put him on the other side of the Saintly Mare and got them close enough our stirrups clinked together.  Worked a charm.  Saintly Mare, being a very experienced cross country horse with many miles at Novice thought this was a lovely stroll and nothing to get excited about.  We finished the ride with Theo giving everyone a lead over a stone wall that is on the Groton House horse trials course and cantering to the finish.

I noticed something odd while I was out with the group.  I'm used to being part of the TB army.  No one asked me Fiona's breed, or Ben's breed, or even Allen's breed.  You could tell from across the show that they were all TBs and that they meant business.  People tend to stand back from the TBs that just ooze energy and athleticism.  Now I have lots of people coming up to me to ask me about Theo's breeding.  They usually guess Friesian cross though some have nailed it with Percheron warmblood cross.  I've also noticed that groups of ladies that have drafts seem to think I'm one of them now.  Where before they would avoid my chestnut TB mare, now they ride right up to me to ask me about mi papi from their own drafty beastie.

I think I've changed teams.  I'm now part of the Draft Army.  I never really noticed it, but the draft types travel in groups, just the like the TBs. 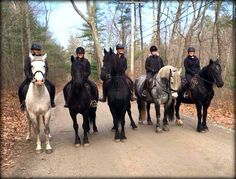 And I'm one of them.  Theo blends right in with groups like this.  His magnificent tail, bushy forelock, high headset, and lazy butt behavior in the warmup landed us with a group of ladies on their gorgeous drafts that were sitting off to the side, watching the TBs zip around while waiting their turn.  The earth shakes when these groups pass you on the trails.  Part of me thought I should take off and join the group of draft and draft cross hunt horses that were cantering past us at a pace that I'm becoming increasingly familiar with:  powerful, earth shaking, very dramatic, but not actually going anywhere quickly.

I never, ever thought I'd ride a draft cross.  Now I think I need a shirt.  Proud Member of the Draft Army.
Posted by Catie at 9:02 AM