Friends in all the places

I recently watched a friend in the National Show in the hunters.  Now I'm watching another friend in the World Show for the AQHA. 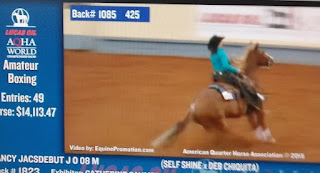 Instead of being a discipline I know well, I spent most of my time watching this going 'wtf is going on?'.  I'd never even heard of boxing before.  After watching a few rounds, I figured out that it was a reining pattern, followed by 46 seconds of working a single cow that was released into the arena with them.  I think that's where the boxing name comes from.  I seriously did a double take when my friend announced she was in the amateur boxing class with her beloved mare.  Boxing what?

It was fun to watch.  I had tail envy for a lot of the show.  It wasn't like the western pleasure ring where everyone had a perfect, fake tail, but there were a lot of glossy horses with thick, lovely tails.  I prefer to watch the performance type events since the horses carry themselves more correctly to my eyes.  Peanut rollers make me a bit crazy, even after spending time in a western pleasure barn.  The reiners and cow horses can't peanut roll since they have work to do.  I was also very envious of the spotless flying changes I saw.  I'll admit to having a twitch of wanting to own a QH and having that insane work ethic.  Not necessarily to do the typical QH disciplines, but there's a lot to be said for a horse that will gallop flat out, then stop and stand on a slack rein.

My friend had a rough round, drawing the crazy cow that actually caused a delay in the show when he refused to leave the ring after an earlier run.  I'm still not entirely sure what was going on, her score was held for review (?), but even I knew that one cow was freaking crazy.  Sneaky, too.  He had a little drop feint thing going on that caught out anyone unlucky enough to get him.  Fortunately she has a good attitude about these things and is already looking forward to next year.  Her girl is only 8, there's lots of time.

It's fun to watch my friend go.  It gives me a chance to watch disciplines I haven't tried and reminds me of my crazy high school days when we rode together on her quarter horses.  Believe it or not, once upon a time, this eventer and that reiner practiced rescue races together and got caught in a flash flood in the Black Hills while trail riding.  Clearly we made it out safe and sound, but it was certainly an adventure.

For those that don't know what a rescue race is, here's an example.


If you have Facebook, check this one out.  But we didn't have a barrel.

Don't ask me how we got her up behind me.  I was 18, dumb, and have no idea.  I do remember a lot of falls and laughter with her oh so tolerant quarter horses watching over us.  Looking back, it's a wonder I made it into college.
Posted by Catie at 7:35 PM