After spending nine hours at the barn, I'm exhausted.  How did I even spend that much time at a barn when I don't own a horse and I don't work there?

First I gave Theo a groom, then I grabbed the bambino for a jumping lesson.  He was wonderful, as usual, and the two of us are starting to really figure each other out.  Trainer A hammered me on my position some more.  We're now working on getting my toes pointed forward in order to let my legs wrap around the horse more effectively.  Ow.  Bob gave me some nice stretches over his back and did a good job jumping through the grid over something a bit bigger than he's used to.  It was a 2'3" oxer by the end and he had to actually jump.  I gave Bob a good groom, turned him out, then started helping the girls around the barn prep for a show tomorrow.

I helped braid Miss Thang and then helped shorten another mare's mane.  I noticed Miss Thang had loose nails in her shoes and, with closer inspection, found they were half off.  Emergency call to the farrier time!  After helping the mares primp and duct taping Miss Thang's shoes for safety, I got mi papi out for some exercise.  Today I put him on a lunge line so he could start feeling like he had a job again.  We worked for about 20 minutes, mostly at a nice swinging walk with a short trot in each direction to check for soundness.  He looked good!  On the way back up I let him graze while I enjoyed the amazing weather.

Word got back to me that the farrier would be out at 4:30.  No way I was leaving before that, so Theo grazed, got soaked, and got wrapped.  Now that it's just protecting the spot on his heel, it's not his whole foot being wrapped anymore.  More vet wrap, less diapers.

At 4:30, the farrier came out.  The masseuse was there at the same time, and the trailer was up next to the barn to load for the show, so there was nowhere for the farrier to set up shop.  That's how I ended up spending the better part of two hours holding horses.  All four of the horses going to the show had to be checked and two of them got their shoes done.  Theo also got his feet done, including his front shoes going back on. 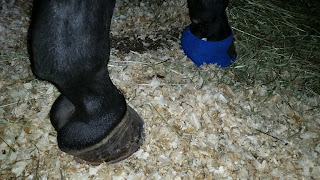 I almost danced a jig.  His shoes are on!  No more cracking and shredding!  I can start trotting him again and maybe, just maybe, ride!

By the time I had Abby the abscess covered and Theo tucked in bed, it was almost 7pm.  Damn, that was a long day.  My Fitbit step count came in at over 20k steps for the day.  My feet are killing me.  But that's all secondary to the fact that Theo has shoes and is looking very sound!  Tomorrow, lunging!