Since I still have a corporate job, I'm still on holiday break.  Today is my last official day of Christmas break, but with everyone gone, my productivity isn't going to be much over the next three days.  Then another three day weekend.  I've been at the barn for hours every day and it's been amazing.  My Fitbit has been impressed with my step counts.  I was planning on cutting out early and riding all week, but we have a nor'easter blowing in for Thursday.  Yuck.

I did get a treasure under the Christmas tree worth sharing.  The hubby is a genius and found these on Amazon after seeing a show bow on my wishlist from Smartpak.  Not that I really wanted a show bow, but Trainer A insists that I have one for formal occasions.  But look at these beauties! 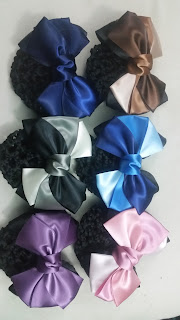 I will be the matchiest match dressage rider in my region this summer.  Black and grey for formal days, navy for the navy coat I've promised myself, and pink to go with my pink browband.  Just don't tell Trainer A.  I don't think her heart can take it.  This is only encouraging me to look at different color coats.  Hubby has finally broken me of my resistance to wearing a show bow.  I want a brown coat so badly.

As for Theo, got a hair cut for Christmas. 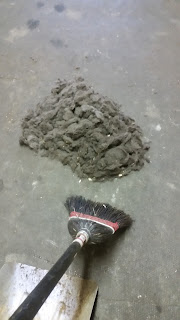 For those keeping count, this is his fourth for the winter and his fifth overall for 2016.  But it did the job and his respiration has been much better.  Today we got up to 50* and I was still able to ride him without issue, so problem solved.  And here I was starting to freak out and think he had COPD and I'd have to retire him because of heaves and --

Yeah, horse ownership can make the most sane person obsessive and whacky.  I forget that the areas I clipped are shaggier than many horses' winter coats.  He was simply too warm and uncomfortable.  He's feeling quite frisky now with his half naked bod.

I also gave him a day with no dressage and just jumps. 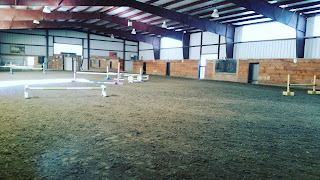 He approved.   A total gentleman on the cross ties after a day of just going forward and jumping. 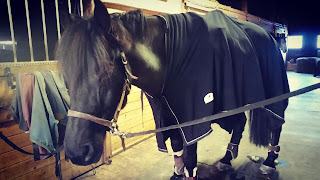 In honor of the h/j shows showing up on our calendar and after a day of jumping courses, I've decided it's time to install his flying change.  Having only a simple change on course is starting to irritate me.  He's plenty broke enough and strong enough to do a change while on course.

Due to his training and jumping mileage, I decided the best route was to build off of the changes of lead over fences we've been doing as a cheat to hide the fact he can't do a flying.  As Trainer A puts it, a jump is just an extension of a canter stride.  Today I had ground poles set on the diagonals across the arena.  We canter over ground poles all the time, it's pretty nonchalant.  We did it a couple times so he was just chilling over them.  We got a nice forward canter, I approached the pole, rebalanced, changed the bend, asked for the change, and boom, flying change over the pole.

I had him do it in both directions to make sure it wasn't a fluke.  Sure enough he swapped out in both directions.  We had some baby bobbles, he botched the footwork (break in the rhythm, the change was clean) on one and wasn't clean on one, but fixed it within two strides so not bad for a baby change.  His ears were flipping back and forth, figuring out what on earth I wanted.  It's like he had to figure out how to manage his feet when he didn't have the hang time that comes with a 2'6" fence to help him out.

He's cute when he's a bit confused.  A couple cookies and big pats made sure he understood that's what I want.  He didn't buck or barge off like a lot of babies will do, so I was very pleased.  Hopefully we'll be able to get a consistent change on him this winter so I don't have to do simple changes when I jump any more.  He'll be in boot camp with Trainer A while I'm in Vegas for a work trip, she can really lock them in for me.

I love vacation life.  I can revel in my pony time, ride while the sun is up, and not have to rush anything.  He's gleaming, I've done body work on his sore muscles, his tail is completely brushed out, all of his stuff has been cleaned, it's amazing.  Going back to reality is going to suck.

Though Theo may not miss me. 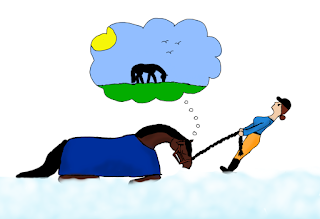