As I carefully led the prancing, snorting, rearing, striking beast down the road, I could only think, "This is my creation". 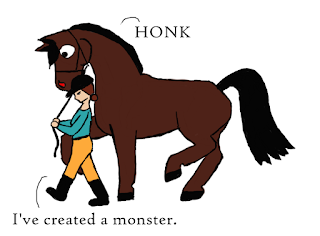 Theo got a day off on Thursday since I wanted to ride every day of my vacation and that would have put him at 10 days straight.  Seems a bit much, so he got one day off.  Just one.  I went to get him Friday while the sun was still up and it was glorious.  I went down to inspect his shed (still dry!) and find my ice cleats that fell off in his field on Wednesday night.  Refreeze is treacherous and I wear little cleats just like Theo's on my winter boots.

Theo flung his head and trotted around after me while I looked for my cleats.  He did look pretty riled up, but every horse on the property was with a sunny, 40* day.  I put a chain shank on him and led him out of his field after I was done hunting through the snow.

That jerk proceeded to go full stud mode.  Not only can he passage now, he can also piaffe.  I discovered this when I told him to quit trying to barge ahead.  So the good news is that he knows to lower his croup and go in diagonal pairs.  Bad news is that it was mixed in with some rearing, striking, and general 'I cannot even deal with myself right now' behavior.  He started honking like a Canadian goose while piaffeing beside me, eyes bugging out of his head and tail flagged.  He pranced, honked, and half reared his way to the barn.  Honking, for those who are confused, is that ridiculous sound that very wound up horses make that's louder than a snort.  It sounds like a honk.  Theo made that sound for most of our jig down the road, looking almost exactly like the cartoon.  I didn't have to exaggerate anything for comedic value.

This is my monster.  My handiwork.  I'm the one that thought it was a good idea to make him strong, give him lots of fuel, and show him how to be powerful.  Whoops.  Is this how Frankenstein felt?

Being Theo, he settled on the cross ties and by the time I was done grooming him, he was head down asleep.  To play it safe, I lunged him for twenty minutes.  No bolting or bucking, just some head shaking when I used the opportunity to really get after him for not going forward.  When I got on, he was the same old pony everyone loves with a small side of extra sass.  And today he was wide eyed and snorty on the way in.  I got right on, put him to work, and he was fine.  Some head shakes, one kick out at my spur, but fantastic over fences.  He's very comfortable changing his lead over a vertical now.  Renvers kind of blew his mind, but he's starting to get the idea. 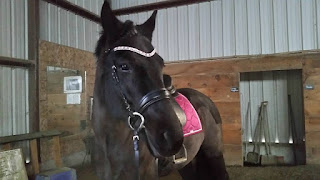 This was exactly what I wanted.  He has the strength and energy to not hate doing hard work.  But man oh man, no one warned me that I'd be spending my winter trying to convince my gelding that he's not a stallion, striking is forbidden, and throwing sparks with his shoes is actually not cool.  No matter what the girls at the barn say.
Posted by Catie at 4:08 PM