I'm still watching videos on DressageTrainingOnline.com.  I'm not sold on this service.  The videos being chunked up into 15 min bits irritates me to no end.  If it's a one hour video, leave it a one hour video and let me run it on my TV.  Audio and/or video sucks on a decent percentage since they're from clinics or symposiums and a lot of the videos are old.  Only 8 of the 144 videos in the Training - Second category are from 2016, which tells me that it's not updating much and I'll burn out of videos quickly.  The search engine is crap.  I typed in medium trot, I got a mad hodge podge of videos that had the key words medium trot.  Some were Grand Prix horses, some just happened to do medium trot during a test.  I want to develop a medium trot, but I couldn't search for 'develop medium trot'.  So you pretty much have to read through all of the videos in a general category and hope.  Is it worth $30 a month, considering you still have to pay for some content (Ingrid Klimke cavaletti talk is extra) and there's an ad at the start of every video?  Nope.  Won't be keeping this one.  Do the free trial, watch some good videos, then leave without feeling like you're missing anything.

But I'm learning a lot in my hours of viewing.  There was a comment between Janet Foy (can you tell I have a judge crush?) and Debbie McDonald that brought me to a screeching stop.  An auditor asked for their advice on what to do with a horse that's conformation did not lend it to moving up the levels.  In that case, it was a horse that had a neck that was tied in very low, making the frame for Third physically challenging.  My ears perked up, since Theo finds some movements challenging due to the way he's built.

The recommendation?  Don't do it to your horse.  It's not fair.  Janet mentioned horses showing up in her ring that are not appropriate and she feels terrible for those horses.  Some horses shouldn't move up.  They should stay at the level where they are physically comfortable and do things like the rider tests and the freestyles.  The point of the rider test is to give people with less talented horses a level playing field.

Does this apply to Theo?  Should I plan on him hitting a ceiling? 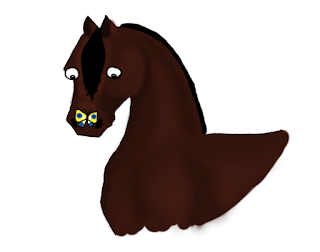 Eh, I don't know.  It's not like I'm shooting for Grand Prix here.  We're not on a crazy timeline because I know it's going to take a long time for me to figure out what I'm doing, much less train up Theo.  I have the sneaking suspicion that I'll be hanging out at Second level for awhile.  Second 3 is not an easy test and if I want to go Third, that means I should be schooling Fourth.  Have you seen Fourth?  Yeah, that's crazy talk.

But being surrounded by the super talented horses at the big shows does make me aware that my horse is very average.  In competitive dressage, he's below average.  He has to work hard to do what those horses can do from year one.  I'm watching videos of five year olds to see tips on what to do with my soon to be thirteen year old.  I've got the advantage of a mature mind and less dramatics since I'm working with a mature horse, but it still throws things into sharp relief.  They do that as their natural way of moving.  Theo?  Not so much.

But there's nothing to stop us.  His feet all go the right way, he's got enough uphill tendency to not have to fight his own body, he's got that big ol' booty, and he has a neck that ties in nicely for a higher frame.  We're still shaking off his years of untrained, inverted plopping, but every clinician and judge that's seen him agrees:  he's average, but cute.  Cute is clinician/judge speak for 'nothing horribly wrong, enjoyable to look at, but not winning any classes'.   No one has said that we have a major conformation problem. 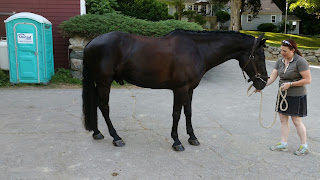 Mental problems?  We've got those in spades.  Both of us.
Posted by Catie at 5:04 PM