Sometimes being a crazy horse mom pays off.  Sometimes.

In August, I thought I noticed a difference in Theo's behavior.  He seemed more fidgety in the cross ties, less happy about being groomed.  I keep a journal in my locker and noticed a pattern of 'tried to bite me' comments appearing.  I mean, Theo is always looking for a shot to bite someone (especially me), but this was different.  I figured he was sore and tired from all of the training we were doing and set him up with some massage sessions.  He loves his massage sessions.

In September, with regionals completely occupying my mind, I still noticed him being more fidgety then the baseline in my head.  He would bite the cross ties when I groomed him.  He's a mouthy boy in general, but that settled in my mind as unusual.  The masseuse and chiro found nothing, even noting that he was a rare case with no pain points in his back at all.  Tight spots, sure, but he leaned into his massage and never acted like something hurt.  Farrier found nothing.  Trainer saw nothing under saddle.  I thought training issue and upped his ground work.

It was October when I was brushing his belly, setting him into a teeth gnashing rage, and it suddenly hit.  I'd seen this before.  Non-specific, edgy, touchy about certain things and particularly unwilling to have his belly touched.  Coming to a head after a competition season with a lot of travel.  It flared up and faded but was always kind of there.

Hellbeast had ulcers.  We put him on ranitadine to confirm the diagnosis and he settled within days.  His stomach didn't hurt anymore and everything else just seemed to get better.  He stayed on ranitadine until I could rummage up the dough to afford a course of Ulcerguard for him.  After that, he would get a preventative dose while showing.  He gained weight and showed less anxiety about life.  He didn't really display as a horse that had stomach pain, he never colicked and was never girthy.  It was just a pattern of irritation that tipped off my vet.

Ulcerguard is no joke in terms of cost.  Neither is endoscoping.  I'm not looking to sink $3K into a diagnosis when most vets are happy to just treat and confirm when the symptoms disappear.  But Ulcerguard is $30 a tube and you need 28 of them.  YIKES.  That's not a light undertaking.  Did I want to just load up on Ulcerguard (in the form of Gastroguard) and see if it helped, or did I want to pay for a vet appointment and confirm the problem?  Because I'd still end up ponying up the dough for the Ulcerguard.

While looking at Ulcerguard prices, I stumbled on a COTH thread about generic omeprazole.  Merial lost their exclusive rights in 2015 and generics are now allowed.  Other COTH threads mentioned these 'pop rocks' for ulcers.  I hunted until I found what they were referring to.  It's generic omeprazole designed to be fed with a horse's food instead of in paste form and it comes from Abler. 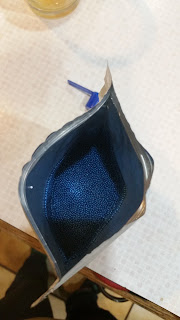 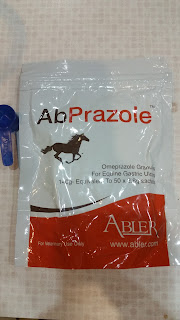 It's not the most mainstream thing.  It's made in India.  But hey, I do business all the time with India for work, that didn't bother me.  A COTH poster had tested the coating of the granules and found they actually worked.  An FDA test showed they did contain the drug they should contain.  No one, anywhere, had any horse hurt by this med.  Some said it didn't work, but no one had a side effect.  Plenty of people reported good results, including at least one with a follow up endoscope.  At $200 bucks for a full 28 days of treatment?  I was willing to take the risk.  I ordered up some pop rocks.

Be warned, regular shipping is SLOW.  7 - 14 business days turns into 3 weeks when you include weekends and Thanksgiving.  I finally got Theo his first dose on Nov 30.  He gets three scoops on top of his breakfast with a bit of corn syrup to make sure he eats it all up.  You can see in the picture how little the scoop is, it's not a lot to add.  The granules are quite small.  They'll dissolve in water, so you can't add water or applesauce to their food.  Corn syrup or molasses is fine.

And you know what?  He was different on the cross ties that night.  Other people noticed.  I brushed his stomach and only got a half hearted comment out of him as opposed to a swishing tail and gnashing teeth.  It took me a second to remember he'd started his meds.  Could that be the cause on day one?  Sure it can.  I have an ulcer and I know that when I take my Prilosec, I feel better within hours.  Same chemical, same process.  This isn't something that would take days to kick in.  The acid in his stomach is reduced the same day.  He feels the difference now.  The fact that someone that had no idea he'd been dosed walked up to me and asked what was different told me it wasn't my crazy, hopeful mind.

I gave it a couple days to make sure I wasn't fooling myself.  Every day was a little different, but that's horses for you.  Temperature change, day off, construction going on outside.  But he didn't seem to mind me handling his stomach as much.  Today I wasn't paying attention while scratching his neck and shoulders with his tail brush and moved to his belly.  He didn't mind a bit.  Then Trainer A mentioned that when she tacked him for his training rides, he seemed calmer about having his belly groomed.  Suspicion confirmed.

I have accepted the fact that Theo has ulcers.  How long has he had them?  Who knows.  Maybe some of his 'rage machine' behavior all these years was because he has a sensitive tummy.  Maybe it was just because of his travel this year.  Doesn't matter.  What matters is that now I know and I can make sure this isn't a problem for him.  He will get 28 days of the treatment dose, then wean off of his pop rocks.  He'll get a preventative dose when traveling and showing in the future.  It's not a tough commitment to make when I can do it for $2 a preventative dose and it can be fed with his breakfast.  That's less than what I pay for his Smartpak.

So yes, to all of my fellow crazy horse moms, sometimes you're right when you think something is bothering your precious baby.  Sometimes, just sometimes, you're on to something and you can lead the way to solving the root cause of some of your perfect angel's problems.  Not all of them, mind you.  He still goes out the left shoulder and still wants to bite me if he thinks I'm not looking.  That's all him.
Posted by Catie at 5:40 PM