I read on a blog once that the greatest gift an owner can give their horse is to teach them how to do a job.  That way, if they ever needed one, they could find another home and wouldn't end up as one of the unwanted horses we see at rescues and in kill pens.  Fiona used to be one of the unwanted ones, a horse that didn't have a job and then the horse that wasn't to be jumped.

Fiona's fearsome reputation took a major blow this weekend.  One of the teenagers was entered in a sanctioned horse trial but her horse went lame.  My trainer texted me and asked if she could take Fiona instead.  I said sure, assuming she was okay with jumping the princess.  This happened on Thursday and they were leaving on Friday for the show, so there was just the one lesson to figure out whether or not they suited.  I'm sure it was unnerving to tack up a mare with a reputation like the princess's, but this particular teen enjoys riding TB mares with some need for speed.  I wasn't worried at all.  As dramatic as she looks from the ground, she always feels very safe to ride.

The teen bounced about at beginner novice height and even took the princess out onto the jumping field to do some cross country fences.  Fiona was quite good.  She did leave a stride out on the four stride, which was a bit unnerving for the rider, but she was honest, well behaved, and enthusiastic.  The rider sounded out of breath but thrilled after jumping her.  I got a message today after the show saying that Fiona was awesome and it included this picture: 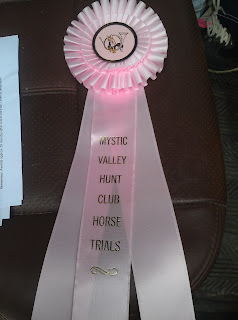 I am honestly thrilled that Fiona was even considered for this.  It says a lot for how far she's come that someone was able to get on her, jump a couple courses, and then take her to a show.  It also says a lot for the guts of the rider, to take a relatively unknown horse to a show.  As my graduate classes wind down and I look at taking Fiona off of full training, I'm hoping that this is the first step to my princess getting some more dates with other riders.  While the image of having a horse that no one can handle but you is very romantic (I've heard it called the Black Stallion syndrome), I don't want that.  I want the opposite of that.  I want the Black Beauty syndrome.  I want lots of people to enjoy my horse.

I expect to have her for the rest of her days, but if, gods forbid, something happens to me?  I want her to be an established Novice level eventer and first level dressage horse that can run about with a junior rider.  I think someone would take her in with that kind of resume.
Posted by Catie at 5:01 PM