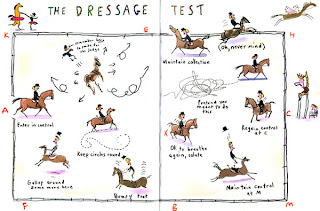 How are they written?  Do they put a bunch of dressage gurus in a room, get them high on crack, and then hand them some paper and pens?  It would explain so much.  Any eventer knows what I'm talking about.  Listening to people discuss their tests can tell you a lot about how confusing these things are.

When in doubt, just go across the diagonal in that test.
No, really, you start down center line at the walk.
I call it the drunken line move, since you're going straight and then just kind of wander off to the right.
G is practically in the judge's lap.  Don't halt until they can see up your horse's nose.

Just look around at any horse trial next to the dressage rings.  You'll see at least one person going over their test.  They're easy to identify, they're the ones mumbling to themselves and drawing odd figures in the air.  They might also be looking skyward as they send up a last minute prayer to the gods of memory and retention.  I'd think it was funny, but I'm a member of their ranks.  This is the real reason why I still show in my Tailored Sportsman breeches:  big pockets that you can hide a dressage test in for last minute, panicked checks on the moves.

The letters make no sense and the moves only make a little bit of sense.  It helps when everything is a mirror image, sure, but only if you're not at all dyslexic.  I'm a bit dyslexic.  I've memorized more than my fair share of tests backwards.  Right, left, same difference.  It's a pity those judges like to ring their little bells when you turn the wrong way.  I don't see what the big deal is.  I'm doing left lead now, I'll do right lead in a minute, just keep your shorts on.

Most of these rants are triggered by something, and in this case, it's the row of tests I have open right now in my browser's tabs.  I've got Training Level 3, First Level 1, Novice A, and Novice B all open.  I counted them up and I think I've got nine different tests that I'm going to need to know this summer.  Any bets on how many errors I get this year?

Let's just put it this way.  I shouldn't be starting my twenty meter circle in front of a judge and realizing that I haven't recalculated my mental markers for a circle in the middle of the arena versus at the end.  It was a complete wing it test, complete with a mare that's done Beginner Novice A so many times that she tried to head right when we hit X on our entering center line.  Having a clever mare is great for some things, but darn annoying when she's trying to tell me how the test goes and she's doing the wrong one.  I got 'need to ride test more accurately'.  I might want to try practicing these tests a bit more before competition.  Just a thought.
Posted by Catie at 7:18 AM