A lot of eventing is about courage.  It takes guts, end of story.  Whether that courage is in facing the judge in dressage or jumping the coffin that makes you feel queasy, we all have our moment of courage.

My moment of courage today was to go into stadium, knowing that the corners were going to be difficult and that it was going to take all that we had to get around the course.  And we pulled it off.


Fiona won the dressage and was clean in stadium. It was probably the best stadium we've had, considering the difficulty of some of those turns. I was just thrilled with her performance.

Cross country was another matter entirely.

I'll be the first to admit, I did not want to jump number two. Flat out did not want to jump it.  It was a big metal barrel or drum. Just tapping my fingernail on it made weird noise and the idea of my sound sensitive mare rapping it with her hooves? I had images of her taking off dancing in my head on the approach, bad enough to make me feel sick. When she hesitated, I wasn't there to say it was okay like I usually do.  Fiona is a horse that will borrow courage from her rider when she's unsure and I just wasn't there for her.  It cost us two stops. Since I had to smack her on the shoulder to get her over, she was rather upset for the rest of the round.  I actually tore a hole in my gloves getting her back because she was so frazzled.

Lots of people call that gutsy, riding a fit TB when she's upset and stressed, but I saw another rider that I considered to be gutsier. 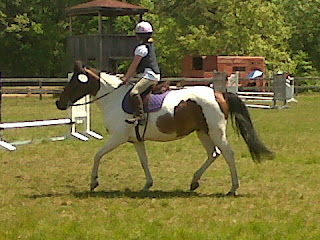 Once upon a time, I was this girl.  I was the little girl on an adorable little pony facing down my first course of verticals.  Now I'm just part of her cheering section/support crew.  She moved up today, moving out of the cross rail division.  It takes guts to go in there and jump around a bunch of verticals.  She took a little tumble in stadium, but she hopped back on and completed her course.  Then she went out and completed her cross country.  It was a real cross country, looping around the field with almost as much distance as the course I ran.  She had a working student running the cross country with her to give her confidence (her second time going out on cross country ever), but by the end of the course the working student was wheezing and lagging far behind while she completed it all on her own.

That takes every bit as much guts as handling Fiona on the worst of her days.  She's going to be a cracker jack rider when her legs get long enough to handle a bigger horse.  Though I do love her little pony, Dancer.  A twenty-something, been there done that mare that I'm sure this little rider will look back on some day with very fond memories.

There is a very special place in heaven for the ponies like her.  She can share a pasture with my first pony, Terry.  I fell off of him a lot, too, but that pony taught me a ridiculous amount.