Fiona's new jumping rig has been dubbed her 'war bridle'.  It does look pretty intimidating when you first see it. 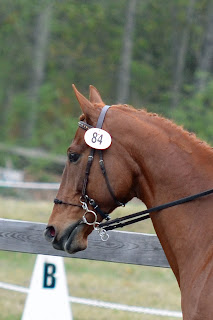 She's now the proud owner of a Myler combination bit (with the low port snaffle mouthpiece, for those that know what I'm babbling about).  While she was in Aiken, my trainer tried her in a couple rigs.  When I got down there, I tried some combinations of my own.  Neither of us liked any of the results we were getting.  She would lock on and take off or pop her head up enough that you couldn't see where you were going.  A lever noseband and running martingale made her rideable, but you definitely had the feeling that you needed more bit and that control was iffy.  She was fighting us and not happy.  The waterford combined with a flash was my go-to bit, but it was only somewhat better.  The princess would pop her head and fight, which is a scary feeling going into a fence, or just pull straight through it.  Without the flash, she would open her mouth wide enough I could see her tongue flapping about.

We needed some leverage, since she's a strong young lady and my trainer and I are not particularly big women.  However, using anything with a gag action was out since she will basically bring her head all the way back to yours to get away from it and run sideways in a borderline panic.  No good.  We tried a pelham and my mare lasted five minutes before she told me to get the heck off.  She would get either pissy or afraid if we went for anything more than the waterford, so nothing with a twist.

And I wonder why I own so many bits.  We've tried a lot of things with the princess.  It's kind of ridiculous when I sit and think about it.

After her disastrous stadium round at Pine Top, someone suggested a Pee Wee bit.  A little research and I decided that wasn't the way I wanted to go.  I don't want her to disappear behind my hands after all of the work we put into convincing her that our hands were to be trusted, and a bit that narrow looked like it would be a problem.  However, that did get me started thinking outside of the box.  What I did remember was that she jumped quite calmly in her hackamore, I just couldn't turn well enough for stadium.  I saw some hackamore rigs combined with a snaffle, but they all had gag action.

During my hunt, I found the Myler combination bit.  I decided to actually order that one because it had the pieces I needed:  a snaffle mouthpiece that wouldn't crack her in her palate and she'd be comfortable carrying, nose pressure to encourage her to slow down without stressing, and leverage without gag action in case she's being . . . herself and the hackamore action is not enough. 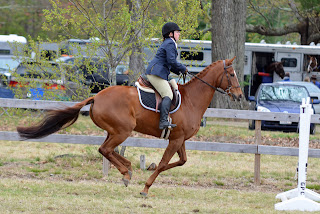 Exhibit A:  Fiona being herself.  Whee.

Lo and behold, it's working.  We've ditched the running martingale for now, as this bit encourages her to flex at the poll rather than pop her head up in front.  Saying 'whoa' gets a downward response now, unless she's throwing a little temper tantrum.  It's quite nice, as I'm able to get in, make the change, and get out of her way.  I'm actually able to ride her much more softly now, as the fight is over and done with in the corner.  The real evidence that this is a good solution for her? 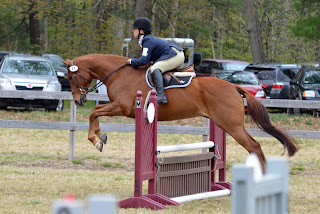 In every single one of the pictures from our stadium round, her mouth is closed.  Even the ones that I'd had to fight her to slow her down.  Being able to ditch the flash and the running martingale makes us both very happy and I think she's more relaxed this way.  I love being able to ride her with nothing tying her mouth shut in all phases.

When the princess is happy?  Everyone is happy. 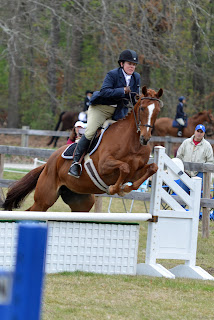 We've still got plenty to work on.
Posted by Catie at 8:24 AM