Unlike last weekend, where I was fussing over my mare and going out for trail rides at my leisure, this weekend I am horseless.  My mare is off at a show, and I am sitting at home watching the live scores update.

Of course, she doesn't go until 4:50pm and it's just after noon right now.  I don't know why I'm already tracking the scores.

I'm still getting used to the idea of someone else taking my horse out and doing things with her.  It's the most logical thing to do while I'm in school and working at a full time job.  It means that she can go to sanctioned shows even when I can't spare an entire weekend and it means that she's getting all of the work and attention she needs even when I can only make it out to the barn three times in a week.  Doesn't mean I have to like it.

There's something about having someone else riding my horse at a show that makes me nervous.  I don't want my mare to embarrass anyone or for people to think badly of her.  I lot of people will react as though their horse is an extension of themselves, and I seem to be one of those people.  If my mare is bad, that's my fault, because she's mine, I chose her, and I did the training on her for the first year and a half.  It doesn't seem to compute for me that she's a living thing that makes her own decisions.   She's a mare, she's the one and only princess, and if she wants to do something?  There is no power in the 'verse that can stop her. 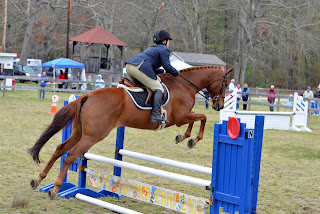 Enjoy the Firefly reference and comparing the princess to River Tam.  Hey, there are a lot of similarities there.

Hopefully she'll do well.  She's been better, but not consistent, with her stadium jumping.  She's slowed down quite a bit and is less frantic, but rather than the sideways routine in the corners, she will run out when stressed.  It's not about the jump, and it's not dirty, she just goes sideways on the approach if she's not happy with the situation.  Considering how much she likes to charge her fences, she's not thrilled with the 'no charging' rule.  I had an amazing jumping lesson on her last week, beautifully rideable, and then my trainer had a great ride on her over fences on Tuesday, but on Thursday she had two run outs.  Other than those she was a good girl, but she's still going through the growing pains of having to jump like a grown up.

I don't think she realizes she's strong enough to jump like this yet, but she's starting to get it.  There's a light at the end of the tunnel as the good jumps start to consistently outnumber the bad.

Tomorrow I get to go groom/spectate/hopefully videotape for stadium and cross country.  Hopefully Fiona will be in the mood to play.  She usually does very well at UNH and really enjoys their cross country courses.  My fingers, toes, and occasionally eyes will be crossed.  She's due to have a good outing after all of the hard work she's been doing.

Same goes for my poor trainer.
Posted by Catie at 10:07 AM