I never thought there would be a day when I would miss wearing a ratcatcher.  For those that aren't familiar with the term, the ratcatcher is that standy up collar that people wear in the hunter/jumper ring.  It's uncomfortable, and as a kid, I used to 'lose' them on a regular basis.  I hated wearing them, I always felt like I was choking.  It was fun when custom monograms were all the rage, though.  I had a horse jumping through my initial, pretty flowers, all sorts of things on my collars.  It was my bit of bling in the hunter ring and it helped with the fact that I was slowly being asphyxiated by my own clothing.

But why would I ever miss wearing something that uncomfortable and, quite honestly, unflattering?  Because my other option is the infamous, accursed stock tie. 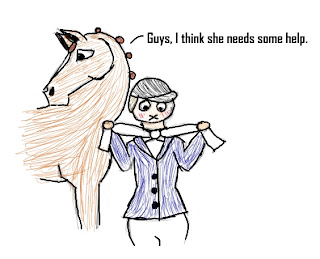 It's like a ratcatcher on steroids because not only is it trying to choke me, it has a big knot and froofiness (yes, that's a word) in front.  Believe me, the front of me does not need further emphasis.  Now I get to wrestle the tails down and pin them so they don't fly out and slap me in the face during my test.  That's assuming that I can find my pins once I'm at the show.  There's some sort of beast living in my garment bag that lives to eat pins.  Judging by some of the frantic exclamations I hear in trailer dressing rooms, I'm not the only one.

If I had any common sense, I'd own a pretied stock tie.  Then you can just velcro it on!  However, I haven't found one that I like that fits me well.  Most of them look kind of sad and flattened.  I don't want that.  If I'm going to have to have froofiness on my chest, I want it to be froofy!  I own a very nice stock tie that has a subtle check pattern to it that I'm sure will be a fabulous tie one day.  If I can subdue it.

I spent fifteen minutes in front of a mirror last time I showed trying to make my stock tie look anything other than very sad.  I managed a nice, fluffy knot that was in the center and shaped the right way, but the tails were just kind of a flop.  I ran out of time, slapped a stock pin on, and went in to show.  But I am not thwarted!  Before I go to Valinor, I will figure out how to create the required froofiness on my chest!  Mostly because my declaration that I was going back to ratcatchers (which are completely legal in eventing) was shot down by the trainer, working students, and everyone else in ear shot.

My research so far has shown that I need more starch to make the tails fold just so.  I also need to pin it higher and catch the knot with the stock pin.  Huh, who knew?  I also saw a trick where, when you're done with the knot, you pull the tails up under the collar again and then pin them.  Nifty!  Asphyxiating, but nifty!  So both of my stock ties are currently in the wash so they can be heavily starched, ironed, and then tied about a thousand times while I figure out how to do this.

I'm not obsessive about turn out.  Really, I'm not.