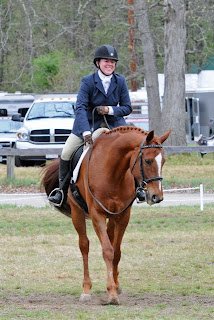 We've got eight sanctioned events under Fiona's belt plus numerous schooling shows, hunter paces, and even a sanctioned dressage show.

At this point, I think that I know my horse well enough to consider her career choices.  What makes the princess happy and what will she enjoy doing for the rest of her days?  I've got a lot of years to plan for since she'll be spending the rest of her days with me.  Who on Earth would ever buy her, anyway?  She's a rare vintage and it takes a very specific palate to enjoy her.  We just lucked out that she's the exact kind of vintage I appreciate.

We'll start with the three phases of eventing, then branch out to the other areas she's played with:

Dressage:  Yes, the princess likes this part.  She will happily head into the arena and get to work.  She has moments of resistance, but that has more to do with asking her for something that's difficult.  She'll get these relaxed, floppy ears and do her darndest to do things right.  Her greatest flaw is trying too hard in this phase, making her tense.  The only catch is that she needs something else to break up the monotony, whether that's a trail ride or a jumping day.  We do not want the princess to be bored.

Cross country:  YES.  The princess would do this every single day if we let her.  Gallop and jump!  This is her idea of heaven.  She's bold, she's brave, and she is one happy pony.  Her ears are up, she's tugging at the bit, and she's ready to roll.  She's pure heaven to ride, so long as you don't mind a horse that wants to gallop and gallop hard.

Stadium:  No.  I've accepted the fact that Fiona doesn't like stadium.  The quick turns and short time between jumps stress her out.  There's something going on psychologically, possibly due to previous training.  She can do a ten meter turn at the canter with just some grunting from effort, we've done it on the flat numerous times.  Try to do a twenty meter turn in stadium and she's suddenly swapping leads, popping her head in the air, and generally carrying on.  She's no longer obedient and in no way relaxed.  It's a bit like managing a powder keg in the middle of a burning building, to use my mother's analogy.

Trail rides:  Fiona was made for this.  Alone, in a group, in the woods, on the beach, front of the group, back of the group, walk on the buckle, quick gallop, she's content to do it all.  While she really enjoys a quick canter through the trees, she'll march along like a western trail pony on a loose rein.  I still think she has the makings of an endurance horse or even a competitive trail horse (the kind that's actually out on a ten mile trail, not the kind in a ring).

Hunter paces:  Oh, so much yes!  These are the best of all worlds.  She gets to go out and jump cross country without the silly other phases and it lasts more than five minutes!  Fiona has thoroughly enjoyed every hunter pace she's been out on.

Foxhunting:  We've had to rule this out due to some of her dog aggression issues.  While she's usually good, if she feels like her personal space is being threatened, she has struck out with her front hoof before.  I don't want to risk her striking out at a hound if the pack is running past her legs.  It's a good feature out on the trails where loose dogs can be an issue, I'd rather she stand her ground and threaten in that situation, but no good for foxhunting.

Barrel Racing:  No way.  Way too stressful as far as the princess is concerned, even if she got a ribbon.  I will never forget the spectators fleeing in fear as Fiona barreled across the ring at the end of her run.  The word was out that she was an eventer and there was a better than 50/50 chance she was just going to jump out of the ring at the end.  Got to love it when your horse is athletic enough to spark a stampede.

So what does this mean for the princess's future?  I'm still debating on that.  She's happy with most of the things she's tried in her life, but one of the three phases of eventing is a major source of stress.  Let's face it, if these stadium issues keep up the way they have been, she's not going to be able to move up past Novice any time in the near future.  We can get away with a lot when the fences are only 2'11", but I'm going to be eating dirt if I try to do a triple combination at 3'3" and she's still skittering sideways in the turns.  She's got professionals scratching their heads at her shenanigans.  Until we hit a major breakthrough, she's maxed out.

Does that mean we've already hit the peak of her competitive career?  I don't think so.  The girl has a lot of dressage potential.  The lower level stuff is boring for her, but she's got the moves and the mind to move up.  She won't be a stunning, 70% topping, championship winning dressage horse, but a bronze medal is well within her abilities.  A bronze medal means that she gets two tests over 60% in first level, second level, and third level.  And it's something that she could relax and learn without major drama.  I asked a dressage trainer if Fiona could do it, and she laughed and replied, "With her eyes closed.".  Of course I've never gone past first level myself, so it will be a learning experience for both of us.  I can probably manage getting her to second level with some help, but third level?  That will be an adventure.  The best part about dressage is that she can keep going on that for another decade easily.

We're going to continue to fight the good fight to figure out the stadium issues, but it might be better for both of us if I settle in for the long haul in Novice and start looking at moving her dressage up instead.   If I look at jumping and eventing as her fun time and her dressage as her work time, I think the princess might be a happier pony.  We're entered in a sanctioned dressage show for the end of June, including a first level test.  Let's see if the princess wants to change her focus a bit.  So long as we still have gallop and jump days.
Posted by Catie at 7:40 AM