The world keeps turning even when you're sick.  I offered a friend a ride to a schooling jumper show back before all of my health stuff happened and I didn't want to back out.  Ratbag pony needs miles and a local outing with cross rails isn't something to be missed.  Twenty minutes in a trailer barely counts as a trip.

On the flip side, I really didn't feel up to jumping around at 2'6" or actually competing.

I messaged the show secretary and got moved to the 2' division and entered as 'not to be judged'.  Popping around a 2' course with no competition pressure?  Yeah, that sounded a bit more my speed.  Theo needed to go on the trailer to keep Ratbag pony company so I might as well jump something.

Ratbag pony went first and did a good job being brave to his crossrails for his very first jumping outing.  There was much wiggling and looking but he didn't stop or refuse.  A couple of them I wasn't sure just how he was getting his butt over the fence with all four legs going in different directions, but he managed it.  His owner was very happy with his performance and with each jump he was visibly getting more confident and sure of himself.  By the end of his second course, he was starting to actually hop over and land cantering with his ears pricked. 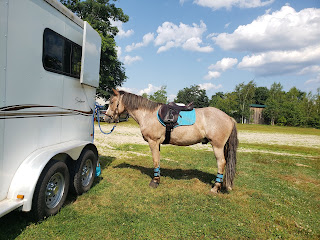 Ratbag is looking really good these days, he's loving single owner life and proving to be a really fun horse to show.  Look at him tied at the trailer!

After I finished cheering and being supportive, I warmed Theo up briefly.  The sun was already getting to me so I kept the warm up brief and basic.  My first course featured two bucks where my beloved pony informed me that I needed to get out of his face and quit riding backwards.  He can only babysit so much!  They were fair and not at all malicious so I let go of his face and let him carry me more.  In my second course he was much happier and cruised around with a relaxed stride.  It's so basic for him, he didn't really need me for much other than picking out fences.

During the roll back turn between fences 10 and 11 on my second course, I had a moment of 'whoa, not feeling good' so I was very happy to go straight from fence 11 to the gate and dismount.  I sat in the shade with some water and let my horse stuff his face with clover. 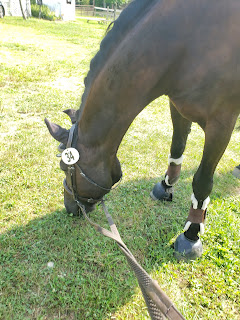 No regrets on my outing.  Ratbag needed those miles and it was absolutely perfect for him.  22 fences in very short order so he really got a feel for what his job is.  Theo didn't really get anything out of this other than a change of pace.  He was my babysitter, keeping me safe when I was at about 70% of my usual self.  Enough for me to know but not enough for most people to notice.  I definitely got some questions on why I was jumping little and unjudged.  I look fine, but I'm still sick and I'm taking it easy just like I'm supposed to.

Thank goodness for ponies that still know how to pack when mom needs a hand.
Posted by Catie at 4:53 PM