I've spent all weekend working on getting Theo to accept a certain level of pressure and chaos.  We all know that shows are chaos, especially in the warm up ring.  Practicing trying to hold to a line while horses spin and spook is great practice and helps him manage his impulses.

But it's not absolute.  Theo's not a robot, he's a living, breathing, feeling creature.  He's got a personality and history that combines to make him unique.  What blows one horse's mind won't even ruffle his feathers.  He'll lose his marbles over things other horses don't notice.  All horses are like this.  Exposure and training can minimize unwanted responses but the base personality is always going to be there.  Your sound sensitive horse will always be sound sensitive, they'll just be better at coping with the impulse. 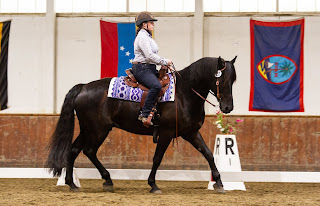 Shoulder in right in our Level 2 test at Mount Holyoke

Theo will always be a high energy horse.  There's no way around that.  He will always be rather intense.  He will always have the potential to boil over when confined and that potential will increase the longer he's confined.  He's been like this as long as anyone's known him.  I used to think it was lack of experience but I was flipping through his history and he's got a lot of miles.  Not just shows but clinics, stall rest, general outings.  There's no improvement over time.  If anything, it's getting worse as he gets stronger.

Is it fair to ask this high energy, intense horse to sit in a stall for 20 hours for multiple days in a row at a show so I can get a ribbon that he doesn't even understand? 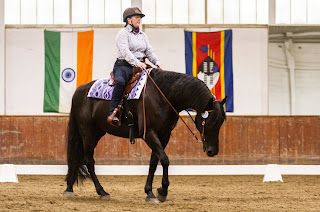 Theo was being well behaved today, but he has tells for when he's over charged.  When I groomed him, his skin shivered.  He reacted to sounds that he usually ignores.  I know what it feels like to be desperate to move.  When I'm in my cube at the office and I feel like my skin is crawling because I need to get up and do something, anything.  Theo reminds me of that.  He's doing everything I tell him to but he's distracted and twitchy.  I can't risk an overreactive horse in a crowded ring of spinning horses.  I put him in the round pen and he completely lost his mind bucking and bolting for ten minutes.  Afterward, he was calm again.  In the clinic he successfully coped with things like pushing through pool noodles, facing a police siren, and walking over fire.  He accepted horses blundering into him or following him so closely they were touching his tail.

I know I'll have to work him in the round pen again tomorrow and that it will be more than 10 minutes.  Giving him flip out time appears to be the key to keeping him manageable when he's in a stall, but it can't be pleasant to feel trapped and frustrated for hours and then blowing your lid.

He was so good for day one, no need to lunge.  He was so good at our jumper show and our western dressage show.  He can do one days without real stress or problems.  He understands.  He goes to a ring, he does his job, he goes home to his field.  It's the overnight shows that bring out all of the problems.  This year the western dressage championships are in New York, a five hour trip. It's a two day show.  I would, as always, be showing alone which means I'd be managing Theo's issues on my own.  Theo wouldn't enjoy going for three days, two nights without turn out.  By the time the actual championship classes came around, his skin would be shivering and he'd be jerking away from noises.  I'll have to lunge him down with him bucking and carrying on in order to show him.  Is it fair to ask him to compete like that? 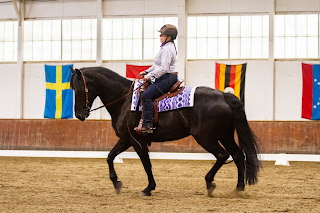 I don't think it is.  It's a job, I get that, but I don't want him to do a job he hates.  I put a lot of effort into finding a job for him that he likes.  Theo HATES being in a stall.  It's a strong word but it fits.  He becomes violent, he does whatever he can to get out, and he gets worse the longer he's in a stall.  He managed to get out of his stall during the night at his bombproofing clinic and it's a bit of a wake up call that his impulses are going to get him hurt.  He was loose for hours and no one knew, the staff found him at breakfast.  I heard him battering at his door today, trying to figure out how to get out with it double locked to keep him in.  They had to add hardware to the door to stop his escapes.  I did think bringing him in several nights in a row at home would help him learn to cope but then he hurt my farrier and I sent him out to his field before he could make another bad decision.

We adapt our goals for our horse's physical limitations.  I think I need to adapt for Theo's mental limitation.  He's not some four year old that needs more miles, he's fifteen.  I think I need to step away from things like trips to Saugerties with four days of competition.  I need to understand that Theo isn't wired in a way to easily cope with confinement.  Every other horse I've shown has coped with being in a stall for a couple nights and do better as the show progresses.  Allen was a high energy horse but he loved horse shows.  He got extra attention and plenty of exercise.  I've never run into a horse that reacts like Theo.  Some horses hate showing, but the actual test is when Theo is at his best.  It's everything else he can't handle.

Maybe if I was showing with a barn I could make it work.  Have someone give him a lunge while I clean his stall, take him for a hack with friends in the morning, have a trainer school him, anything to burn that energy off of him.  Showing by myself, I get overwhelmed trying to manage him.  I've got a scar on my scalp to remind me of what happens when I'm exhausted and he's explosive.

It's hard since I'm so competitive, but I'm going to skip both of my championships.  I can't think of any scenario where I go to these solo and either of us have a good time.  I'll do some more local one day shows instead.  I can focus on my Second level scores rather than chasing tri-colors in New York.  It's a sucky decision for me.  I've got Theo to the point that Worlds and Nationals are legitimate possibilities, but it's not the right decision for him.

On the bright side, it means I won't need to stick to my ramen lifestyle.
Posted by Catie at 8:22 PM