Mad man with a gas can.  Our clinician smiled quite broadly when I called him that, so I feel it's accurate.  For the second year in a row, Theo went to a clinic for mounted police style despooking.  Last year I had no idea what I was walking into.  This year, I was prepared. 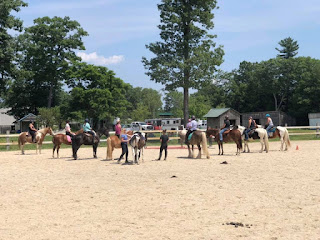 This year's class out in the 90* heat, poor Theo is the big black horse third from the left

Theo rocked it.  Seriously rocked it.  I put more pressure on him this year, asking him to walk through things quicker and offering him as the lead horse more often.  Most of his spooks were brief and he would walk forward through the obstacle once he got a chance to look at it. I may have loudly announced 'I will sell you for a plug nickel' when he stopped at a board on the ground.  He believed me and promptly walked forward.

He let several horses graft onto his tail for comfort as he marched through.  Pool noodles, moving bridges, tarps on arches, he can manage all of that.  He even handled the smoke bomb pretty well.  He didn't like it, but he spiraled in as needed and walked through it so long as there weren't horses spinning in front of him.

Fire is the one thing that makes him go 'NOPE, exit stage left'.  Two times he completely noped out and went flying across the ring.  Only when it's a big fire, though.  Once it's under a foot tall, he'll go through it calmly.  When it's first lit?  He's having none of it.  That first cloud of smoke billowing up and the flames jumping up makes him want to run.  We got it down to about 30 seconds from lighting to him being okay with going through but he couldn't be the first horse at any point.  It was just too much for him.  He is really sensitive about things moving at his feet.

He understands his job and he will bravely push through once he understands.  He went so far as to shoulder check a hesitating horse out of his way when he decided that he was just going to go through and get it over with.  I felt bad but he really wasn't letting me have an opinion.  He was supposed to be on the other side and dang it, he was getting this over with and I was coming with him.  He's such an odd little duck sometimes.

While working through multiple obstacles with fire, he went on the contact, lifted his shoulders, and really worked through it.  He is a horse that gets confidence from his rider and that includes going into a working frame.  Someone called for me to loosen my reins and I replied 'I can't!'.  Theo was on the contact like when we do collected work and if I let go in that moment, he would have fallen on his face.  Smarty pants had his hocks way under him as he stepped through the pool noodles and fire.  I wasn't pulling, he was pushing.  As a dressage rider, he felt amazing.  Clearly impulsion really does come from the scary end of the arena.  Maybe I can hire someone to light fires around the arena during my tests . . . 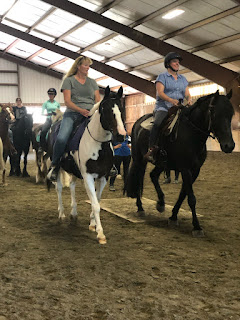 Leading a drill with a fellow western dressage competitor, dressage horses are good at this stuff

Aside from escaping from his stall and the round pen theatrics, he was a model citizen.  I couldn't ask for more.  He stared down a drone, a truck with sirens and lights going, smoke, fire, a barking German Shepherd (also offered to teach the young dog a lesson about getting too close to a horse's hooves), and even the thunderstorm that rolled through.

As a repeat student, it wasn't about learning new skills this time.  It was more of a refresher.  Most of the skills I used were the same skills I used to get around the arena at our shows this spring.  It's been awhile since Theo was faced with something truly terrifying that he needed to push through, not skirt around.  It's important we both remember the procedure and the rules for those occasions.  It's even more important that we remember that we can.

We walked through fire.  We're a bad ass dressage team.
Posted by Catie at 4:22 PM