I'm extremely grateful that when I had to suddenly disappear, Theo was cared for.  It's why I stick with full board.  If something happens in my life, I know my horse has food, water, shelter, and eyes on him.  When I let Trainer A know that I'd be out for awhile, she picked up some extra rides on the beast.  That certainly helped me relax since my horse was being groomed and ridden.

When I got back, Theo was rather cranky.  He just wasn't as relaxed in the aisle or under saddle.  It took double the ear rubs and sweet talking to get him to relax and engage with me.  It was weird, like visiting past Theo when it took conscious effort to get him to come out of his shell and engage.  Taking the time to completely brush his tail out, condition his summer coat, rebraid his mane, and scrub out his ears got his reactions back to what I expected. 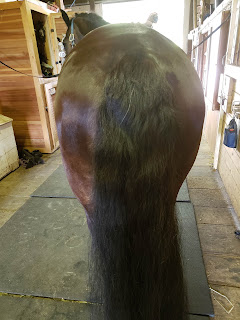 Why did I think letting his tail go untrimmed was a good idea?  It's twice as wide at the top now.

During his regular massage, we discovered that Theo has been clenching his jaw which is not something he usually does.  His face massage is usually a formality, something he enjoys because he likes having his face rubbed and not because he has tight muscles.  Yesterday he reacted sharply to having his jaw manipulated and it startled us both so much he almost hit me in the face with his nose.  I was expecting him to sink down and make funny faces, not snap back and away.  His massage therapist kept at it and worked until he was chewing and making faces again, but it was very odd.  Combined with his locked up poll, he appears to have a lot of rage stored away.

Our best guess is that he locked Trainer A out from his nose to his tail, particularly on the right.  After his massage, there was much yawning and a softer eye.  I'd already ridden him and worked on getting him back up in front of my leg.  I knew he'd locked my leg out, but I didn't realize just how much he'd locked out the bit.  I was going long and low for much of my ride to get his topline back on board with the program. 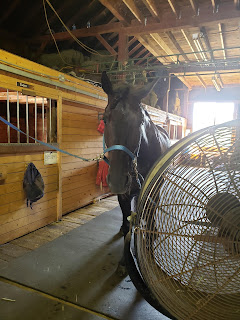 He's not spoiled, I have no idea why everyone says that

What the heck happened while I was out?

I know they had a fight but I'm starting to think the fight was the end of a multi-day escalation.  Theo will usually give someone a couple of warnings before he gets to the point of a real fight.  Trainer A doesn't take a warning the way I do.  I back off and change tracks when I get a warning behavior.  Trainer A tends to correct.  This is part of the reason why I bought Theo while she avoided riding him while he was a school horse, their personalities clash.  Not a problem once a week, but with multiple rides in a row, it apparently came to a head.  She said one tough ride, I suspect it was a build up over several rides whether or not she was aware of the building storm.

After four days of work, a massage, hours of grooming, and a whole bag of cookies, I got my pony back.  He came up in the bridle and offered some hard work.  I knew he was back when I had to say 'easy killer' because he was surging against the bridle in the walk.  We picked up the canter, did a little half pass, changed direction, repeated.  It's only quarter line to center line, not at all steep, but he's getting more comfortable with the idea.  Considering how long it took to get the idea of leg yield into his head, I'm not surprised that it's taking a long time to get him to comprehend going lateral in the canter.

He's so much fun to ride when he's in the game.  He's my bouncy ball that really gets into his work when he finds it mentally challenging and he knows he's going to get a reward. 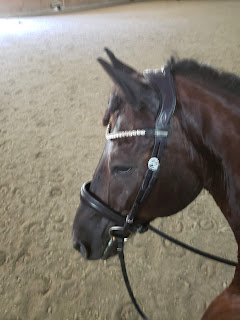 Tomorrow will probably be a jumping day to put a bow on our return to business as usual.  I want to make sure his brain is back before he gets a day off.

I also have to think about what my plan is for when I travel in the future.  If he can no longer work with Trainer A, what's the plan?  Who can ride him?  Really, not a lot of people unless they're supervised.  When he's good, he's very very good but when he's bad?  Holy crap clear the ring.  Most of my friends don't have the skill set to manage naughty Theo or pick up the warning signs that there's a problem coming.  I hate giving him time off but I might not have much of a choice.

I have somehow ended up with a one person horse.
Posted by Catie at 7:25 PM