Theo and I are on break and that means he needs to get some maintenance done. 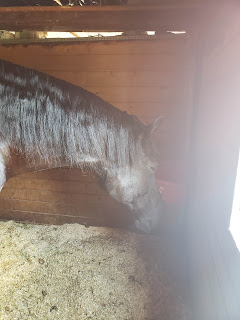 Sleeping off some tranq

The dentist was out yesterday and Theo got floated.  Interestingly, for the first time since I got him, I was told that he had some issues.  He had lots of sharp edges and I was told that as he moves up the levels, he'll need to be floated more often.  Like twice a year now and apparently one Grand Prix dressage horse gets done four times a year.

Has anyone else heard that?  Theo was a couple months over due so the sharp edges aren't shocking, but is this yet another thing that will need more care as he works harder?  And if so, why?  I'm just befuddled that upper level dressage horses would wear their teeth in such a different way that they need to be floated more often.  Unless they're grinding their teeth during work, but that's a whole other thing.  If Theo's grinding his teeth, we've got a training problem.

Today was hocks and stifles.  I decided to hang on to the SI injection and see what the stifles get us.  When we did hocks, the left lead canter straightened right up.  If the flat tire moments and reluctance to sit in the canter are fixed up with the stifles, then I know where the problem is.  If the stifle is making him compensate, that may be why his SI is out about once a quarter.  The chiro is happy with his improvement with regular massage, so we'll just do hocks and stifles today. 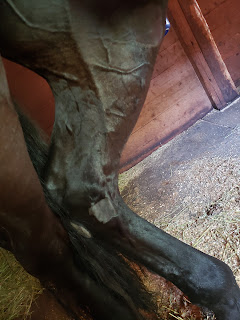 The vet is recommending I do the SI either way to help stave off future issues and I think that's what's going to happen.  Theo is a show pony and that means a lot of special care and maintenance to support him while he does hard work.  I've still got a Bronze to earn, we've got a lot of work to do.

He's now stuck in a stall until Saturday, gods help us all.  Saturday is also a massage but he'll get a couple hours in turn out before that happens.  I like the massage therapist and want her to come back.  Next week is a farrier visit.  By the time we go out and show on the 20th, he'll be feeling like a whole new pony.
Posted by Catie at 7:08 PM