Thinking outside the box

Fiona can be a handful. It's not that she's being 'bad' or actively trying to evade something, she's usually just very excited and anticipating. Not necessarily bad traits in and of themselves, until she decides to get explosive. We've been working at this for about 199 days and I think we've made a lot of progress. For example, in our jumping lesson last night, Fiona was jumping 2'6" verticals and bounced through a grid with plenty of ground poles. We're still trotting into our fences, but I know it's just a matter of time before she's doing the exact same thing at the canter. Soon, soon, we're getting so close.

But how did we get there? Very creative thinking. First there were the steep cross-rails with lots of ground poles. Then there were the sharp turns and having our directions called out while we were in the air. The other trick we found takes an instructor with some serious guts to pull off. 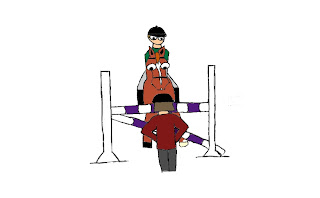 My instructor will step in front of the fence on our approach. I'm still not sure which one of us she's backing off, since it's very effective on both of us. The princess and I agree, running over the teacher is bad, especially since the teacher also feeds a couple times a week. Fiona is very, very aware of where food comes from. We're not thinking about rushing the fence, we're thinking 'we better wait and make sure she has time to get out of the way.' And it works. The princess is just too sweet of a horse to rush at something with a human in the way.

I have to give my instructor credit, that takes some guts. I know I wouldn't want to be on the other side of a fence with the princess barreling toward it. It took some getting used to, and Fiona can get wiggly if she's not sure about this. It takes a lot of timing on our instructor's part to back us off while still getting out of the way in time for Fiona to confidently jump.

The odd part is that I have no memories of my instructor getting out of the way. I clearly remember every time she's stepped in front of us, since I usually make eye contact to make sure this is really the exercise or I say her name, but I'm usually concentrating so hard on Fiona that I don't know when she steps out of the way. It's weird. Once I know this is the exercise, it's like she just disappears. I hope my brain isn't grouping her in with the jump . . .

In other exciting news, my training trip may be back on. We're currently scrambling to get the princess a spot on a trailer. I was offered a couple horses to ride in Aiken, but I really want to bring Fiona down. I just don't want to hitchhike the whole way. The princess doesn't even have thumbs.
Posted by Catie at 7:43 AM