In order to have a high, you must have lows. 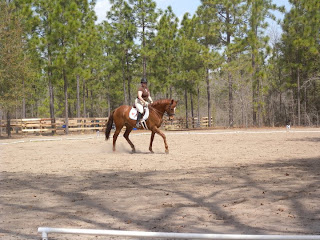 Fiona's lame. It's not bad, but there's something up with her right hind. It looks to be up high, probably the stifle. It's subtle, she's not hopping lame or anything. We did work her for a bit to see how she would react and she started to work out of it, but we decided to just give her today off. She's done a lot in the last couple days, and I'd rather not push anything. So the princess went back in her paddock and I moped through lunch.

For the cross country schooling today I took another horse named Kelvin. There is nothing in the world like the indignant glare of a chestnut thoroughbred mare that is being left home when the other horses are getting to go have fun. I swear she stared at me while I got out my catch ride (another chestnut thoroughbred). The look was very much 'yo, you've got the wrong horse, get over here and get me before the trailers leave!'. I felt so guilty. It's almost like cheating on someone. I slinked onto the truck and tried to not look in the rearview mirror. I could feel her glaring holes in the back of my head.

Of course, I'd never ridden Kelvin before. It's very interesting meeting a new horse while cantering through an open field with horses cantering in all directions. He was a good boy, but a bit of a bulldog. He used to foxhunt, so he is definitely of an opinion on pace. In Kelvin's opinion, get your foot off the brake and hang on to something. He's also something of an extravagant jumper. My back did not appreciate his enthusiasm. In the end we had fun, but I missed my mare. It wasn't until he was putting his head down and trying to barrel at a fence that I realized just how adjustable she can be. And that she'll jump from anywhere. Kelvin stopped when I presented him to a fence with a crooked line (my bad, I'll take responsibility for that). I was surprised, because Fiona wouldn't have batted an eyelash. I think she's spoiling me.

Today was frustrating. That's the best word for it. It looks like the princess will be coming home this weekend, rather than a week out. I'm divided on my reaction. On the one hand, I'm selfish and I want my mare. On the other hand, a week off in the sun and a chiropractor visit would have been good for her, particularly when she seems to have an issue popping up. If she's looking better tomorrow, I'll ride her in Hitchcock Woods with the rest of the camp. If she still looks sore she'll get another day off and I'll plan on having the vet see her when she gets back.

I think I'll have a martini with dinner.
Posted by Catie at 3:22 PM