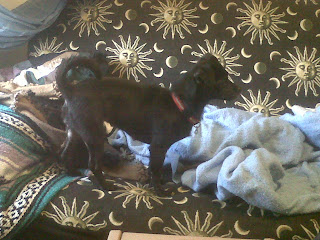 As I mentioned on my blog before, we recently lost our Min Pin Cruizer. After eleven years, that is a very big collar to fill. Cruizer was my first dog as an adult, meaning all the vet bills, feeding, training, and responsibility were mine. It wasn't until I started considering a new friend for Cowboy that I realized just what a big chunk of my life that dog was there for.

Cowboy has never been an only dog, and he got clingy and anxious after Cruizer died. The hubby and I decided that after my trip to SC, since that would give us a month and a half to recover and I wouldn't be so distracted after vacation, we'd look at the local shelters for a new family member. Today was the chosen day to go out. We packed up Cowboy and set out to find him a sibling.

Our first attempt was with a small Ibizian hound that was very sweet, but Cowboy couldn't handle the fact she was that much bigger than him. He was not a happy puppy. Our second attempt was little Peyton. Weighing in at nine pounds, she's almost exactly the same size. She's also a female, and a submissive one at that, so if he postures she just caves in. Hard for him to get into a fight like that. The meeting went well, our application checked out, and much quicker than we thought possible, we have a new dog.

Peyton is a chihuahua/pug mix, so we're calling her a Chug. At least that's what everyone is guessing. She was pulled from a West Virginia shelter with a high kill rate and transported to the Salem Animal Rescue League, where we found her. We got lucky, since she had just completed her quarantine. I have a feeling a charming, spunky young lady like Peyton wasn't going to stick around long. Being a recent stray we have no idea what her past was like. We're just starting over and assuming she's clueless. She's one year old (again, best guess), so training shouldn't be too brutal. Right now she's just learning her name.

After the initial excitement of a new home and new toys to throw all over the living room, the both of them have settled down. Cowboy has that classic look of 'what is this and why is it in my house?'. He's curled up in a dog bed, using my feet as a pillow. This is hard for him, but he seems to be okay with things. Peyton is on the futon, absolutely destroying a bully stick and quite content with her new space. I'm sure future updates on Peyton's training and exploits will show up. With such cute dogs around, I'll use any excuse to show them off.
Posted by Catie at 1:21 PM