When trust is lost

I'm prone to overreacting so I tend to assume that I'm overreacting.  So an outside opinion is requested. 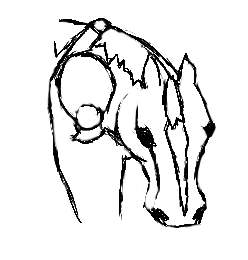 A beloved (like seriously, fan club because he is a damn unicorn, I've been cuddling and sneaking treats to this horse for years) school horse gets kicked in the field.  He's sore, fluid on the knee, but fine.  He spends a couple days inside and then gets the green light to go outside.  He celebrates his freedom by going for a gallop and having a fall.  Several witnesses to the fall and they see him go down hard on his knee.  He is immediately hopping lame.  He gets cold hosing, a tab of bute, and into a stall.  Within a couple hours, he is taking no weight on that leg and is not willing to move four steps to reach the water bucket in his stall.

Should you call the vet?

I showed up at the barn a couple hours after the fall, was told the story, and checked out the horse.  I said yes, absolutely, call the vet right now.  Front leg taking no weight after a bad fall?  That's not even a question.  I didn't suspect fracture as there was only a little swelling right below the knee but he reacted to palpation and kept trying to get even the teeniest bit of weight off.  With bute already on board.  I had only seen two horses in my life that lame before this one and . . . it wasn't good.

I talked to Trainer A and she chose to not call the vet since he was on vacation and they would need to call the back up vet.  I have to assume economics since we've used the back up vet in the past for Theo and he's quite good.  They waited from Friday morning till Monday morning when the regular vet was back.  By Monday morning, it was even worse.  The leg suddenly swelled up and the vet had to rush out.

Diagnosis:  Fracture that 'completed' on Monday.  The horse was euthanized.  I found out on Tuesday when I went to his stall and found it empty.  He wasn't outside, he wasn't anywhere.  I was looking for him and the boarders I asked had no idea.  So I texted Trainer A and heard the news.  I had been hoping and praying for a seriously blown ligament.  I knew it was bad, like life ending bad, especially with no treatment but maybe I was wrong.  Maybe he would be okay.

I'd known in my gut that he wouldn't be there when I arrived.  That didn't get me ready for the empty stall.  It also made the fact he had to wait three days worse.  Fractures hurt, even when they're not displaced.  I can't even imagine.

I told the barn owner that I had major, major issues with how that went down.  He needed a vet on Friday, not on Monday.  He lived with a broken leg for three days.  I had to push to get anyone to put ice on the swelling for pity's sake.  She replied that it was a really difficult situation, that they thought it was just a reinjury of his knee.  I can't take that answer.  Fluid on the knee and a limp is one thing.  This horse wouldn't move four steps to get to his water bucket.  I'm familiar with making the nearly impossible choices with horses.  You get it wrong some days and you regret it.  I've done it, it sucks.  The vet comes out for nothing or you think it's nothing and it turns out to be a very big something.  But this wasn't a hard choice.  Non-weight bearing after a bad fall, you call the damn vet.

I'm looking for a new barn.  After this display of lack of horsemanship, I don't feel comfortable leaving Theo in their care.  What if they couldn't reach me?  What if I was on a camping trip?  Would they leave him like that for three days?  Theo is not a school horse, I have to assume they would know to call the vet immediately but I'd also assumed they would do that for a horse that was so valuable to their lesson program.  This does not impact my horse or his care in any way but I have lost all trust in the barn's management. 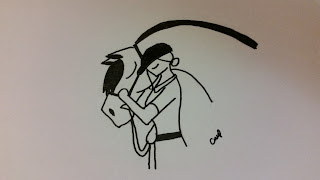 Some things have been boiling under the surface in regards to the barn but this is something that feels like hitting a brick wall.  Like I can't stay at this barn anymore despite the fact Theo has lived in the same field for six years and moving him will be very difficult for him.  Am I overreacting?
Posted by Catie at 9:16 PM