Keep on keepin' on

The barn hunt is on.  I really hate moving so I'm grumpy about the whole thing but I have hope that I'll land somewhere with more of a performance focus where I won't be such a squeaky wheel.  Where my fussing over footing is normal and not met with blank stares and 'what do you mean it's wavy?'.  I have a lead and, most importantly, a dear friend is already there.  It's not 24/7 turn out so there will be a very steep learning curve but I'm discovering that 24/7 turn out doesn't usually go with things like indoor arenas and full service board.  I want the show horse level of care and that seems to come with a stall. 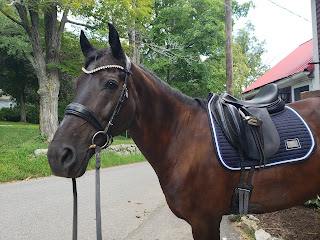 Because he's a damn show horse

The place with the stalls that have run out paddocks is full and doesn't even have a waiting list.  I'll admit, I cried a bit.

But 7:30am to 4pm  turn out isn't bad.  I ride after 4pm so that's another couple hours out of the stall.  And if he can acclimate, away horse shows will be much easier!  I guess we're going to find out.  It's a h/j focused barn but I'm completely happy to take a jumping lesson once a week.  Theo would be thrilled to have more jumping time.  They also allow outside experts so Trainer Z could come out to visit.  That works for me. 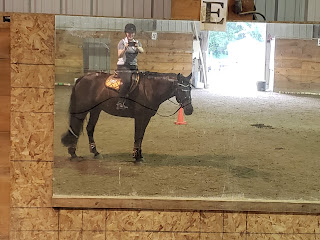 See, we own a jump saddle and everything!

In the meantime, the vet came out for his lameness exam.  I love a lameness exam that includes 'I know he's not lame, but . . . '.  My poor vet's assistant was perplexed.  He trotted and cantered on the lunge in a (lazy) totally normal manner.  With my vet's clientele, this probably looked really weird.  My vet said that he's still guarding the pelvis though the hind end looks much better after the hocks and stifles were done.  No sign of an issue up front, down low, or anywhere else.  Nothing soft tissue, either.  Let's be honest, there was barely a sign of an issue at all.  If he wasn't a mid-level dressage horse (and a super sensitive princess), I probably wouldn't know anything was wrong.

We went ahead with the SI injection since that was the plan before and the most obvious step with him guarding that kind of movement.  I was relieved to hear that the vet didn't see anything outside of the pelvis stuff already identified.  Theo is now taking yet another five days off from work.  This does not bode well for my show at the end of the month but it's the logical next step.  And while he's on hand walk only, I'll be out looking at facilities.

I want no part in the rumors and drama at the barn.  I want to step away quietly and focus on giving Theo the best care possible.
Posted by Catie at 7:48 PM