Based on my experiences over the past two years, horse shows suck.  They're exhausting, overwhelming, lonely nightmares and we actually pay to experience this torture.  Which is just crazy.  I'm usually sun burnt, over tired, and hungry.  I go because I crave the chance to see where I'm at but I hate the decision most of the time I'm there. 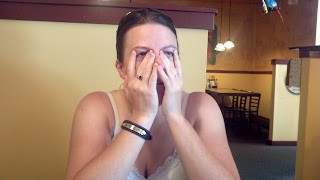 This expression pretty much the whole time

Folks, I think I've been doing this wrong.  Today I went to a show and I was not over tired, lonely, or freaked out the whole time.  How did that happen?  A number of things.

Weather:  70* and sunny with low humidity and a nice breeze as I went down centerline.  Heaven.

Location:  A beautiful dressage farm about an hour away.  Just big enough to be fun but small enough to be casual and comfortable.

Support:  For the first time in 2 years, I had a trainer in warmup.

Pony:  My pony is feeling good and was happy to let everyone see what a fancy boy he is. 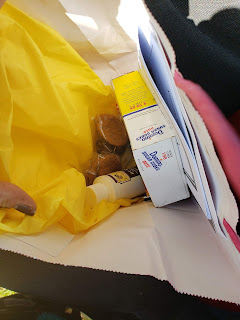 Absolutely zero media since I was so busy enjoying the day, but I did grab a picture of the goodie bags this facility hands out.  Yes, that is an entire box of sugar cubes, a bag of ginger snap cookies, and mints down in the bottom.  This is Theo's favorite facility.

Some of this I can't control.  Ride times are really an act of fate.  Weather this glorious can only happen in northern New England as we cruise into fall.  It's the first glimpse of the two months that make the other ten bearable.

The coaching I can control and after this, I will be highly motivated to make that happen.  Trainer Z was at the show with about 6 riders (sounds like her business is taking off) including her other Second Level student.  This worked a treat since we had ride times within ten minutes of each other, in the same ring, and were warming up at the same time.  Her horse is an OTTB named Noodles.  He is grey, leggy, and so very sweet.  He doesn't like to stand still and is, in every way, Theo's opposite.  His rider is a tall, skinny teenager.  My exact opposite.  However, we needed similar warm ups.

Noodles got a twenty minute head start because he's a TB and needs a bit more time to bring his brain online.  Theo joined in and felt like a million bucks.  He loved the footing in the warm up and his updated hips were swinging away.  Trainer Z hasn't seen him in almost a month and was so happy to see the way he was moving in his hind end.  For ten minutes, it was business as usual.  A nice walk, some long stretchy trot, a bit of canter in each direction.  Just letting my older boy warm up and settle into the new ring.

Then Trainer Z took over and dropped the hammer.  It was everything I've been missing for the past two years.  Do the transition again, he needs to wait for you.  Rounder, that's not his Second level neck.  Come around, do the medium, make it less abrupt.  Relax, try to make it look less uncomfortable.  Work the free walk, get him to stretch.  Again.  Again.  We worked a solid 40 minutes and pushed Theo from sleepy to fizzy/rude to rideable.  I don't usually push him all the way through this cycle because I worry I'm doing too much, the wrong thing, whatever.  I would have stopped ten minutes before we did but she said nope, he wasn't ready. 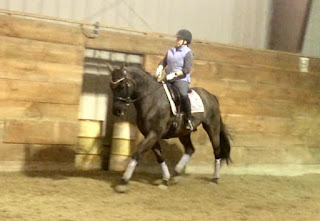 She was right, I'm not ready to warm up on my own right now.  I'm still a bit shaky on what 'it' feels like.  I can't chase 'it' and manage warm up and my ride time and traffic.  I have no damn idea if Theo's looking like a Second level horse.  I need someone to watch my transition, say do it again, and tell me what I need to change.  No emotion, no wandering around warmup without a plan, just structure and strict timing that I don't need to manage.  The ring stewards talked to my trainer, not me.  I focused on Theo lifting his shoulders, not my ride time.

My trainer.  It's been a really long time since I had someone to call my trainer in the warm up.

She herded us down to the ring.  I went down at the same time as Noodles since Theo needs a few more minutes to adapt to a change of scenery and he would be much happier walking down with his new friend and Trainer Z (who he completely recognizes as one of his people now).  Theo promptly fell asleep next to the ring and managed to convince Noodles to stand and chill with him.  It was good to see the two boys chilling side by side and Noodles taking a note from the much lazier half.

My performance?  As Trainer Z said, we nailed it.  Theo was in a really good mindset.  He had the extra fizz worked off and had his warm up fresh in his mind.  Trainer Z told us to canter outside of the ring before we came in and that made my brain flail but we tried it and it helped us have the right amount of energy when we went in.  I had my orders to keep my reins short and my legs on.

It was a really good test.  Of course we had the occasional bobble.  I botched the shoulder-in right because I screwed up the corner before it and at this point, we can't recover fast enough to salvage the movement.  5.  Our second medium trot was non-existent as my tired horse informed me the tank was empty.  5.  But both centerlines were 7's.  The down transitions out of the canter got a 7 and a 6.5.  We mostly got 6's.  Lots and lots of 6's.  Final score was 60.7, good for third out of eight rides.  Scores were quite low with the winners tying at 62.1.  Second Level champion got a 63%.  Ouch.  Trainer Z thought it could have got a 65 with a different judge since there were very few errors and most of the movements looked confirmed.  I thought it was more like a 63% but I'll defer to her expertise.

I don't really care.  2/3 of a Bronze!!!!  3rd place including the open division!!!  I have my Second Level scores and can start working on Third!!!  Trainer Z did get video so I will hopefully have both video and judge's comments soon.

Theo was wiped so I scratched my second test.  He had put down a fantastic test, there was nothing left for him to do that day.  With some more fitness we could go back to two tests in a day, but not for this show.  I stripped him down and watched tests while he grazed and let strangers admire and love on him.  I don't have my test yet because there was a mix up with my class and they couldn't give me my test until it was sorted.  I have my online scores, but no comments.  Trainer Z had the last rider of the day so she offered to pick up my test and ribbon so I could take my fancy dancy dressage pony home.

I didn't even know how much I missed this.
Posted by Catie at 6:40 PM