New digs, new routines, new feed.  The current barn was on Blue Seal for a long time, but swapped to Poulin about three months ago.  I rebuilt his supplements and diet to use those grain options.  The new barn is on Nutrena.  Thank goodness for feedxl.com or I would be losing my mind.  I spent quite a bit of yesterday with charts and feed labels, once again balancing Theo's diet. 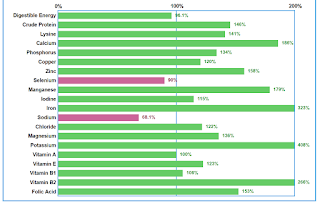 I can't figure out how to add a salt lick, so ignore the red sodium bar and I'm leaving the selenium since I don't have a hay analysis for the new hay yet

Nutrena is not the friendliest brand in terms of NSC.  They do like that sugar.  The lowest one I found was 15%, SafeChoice Special Care.  For comparison, Theo's currently on Carb-Safe with 5.4% NSC.  Carb Guard comes in at 11% and he was on that with great results for years.

Theo doesn't have any metabolic concerns, his low carb lifestyle originated from some of his bad behavior.  Way back when he was a lesson horse they had him on a cheap grain that had a lot of corn and molasses, something like 33% NSC.  I swapped him to Carb Guard to see if that took down some of the fizzy, reactive behavior.  Sure enough, we had less trouble under saddle so we kept with it.  He's enough of a bratty toddler without adding a bunch of sugar.

The new barn's default grain is Nutrena ProForce and while it's not crazy sugary, it's a lot more than Theo's seen in years.  I really don't want to see him hit the rafters and act like a child that was left unattended in a candy store.  Or colic.  His system just isn't used to it.  He'll also be seeing less fiber and more protein.  He'll be on free choice hay so I'm not that concerned about the decreased fiber, but I'm eyeballing that protein while figuring out just how much demon I might create with a feed change. 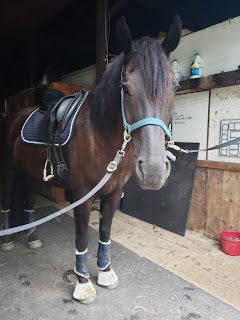 Not to be trusted

So the current plan is to bring over a couple bags of his current stuff and very gradually shift him to the SafeChoice so he gets used to the sugar.  Probably take a month to transition him.  Excessive?  Yes, but I like living and this is the time of year when Theo's prone to losing his little pony mind anyway.  He only gets 4 lbs of grain a day so its not like I'm dumping pixie sticks in him.  I'm just paranoid.

This is totally normal, right?  Spending most of a working day balancing your horse's diet?
Posted by Catie at 7:19 AM