Being the owner can be awesome.

My wake up call this show morning?  7:30am.  And I had time to stop by the barn to pick up my braiding bands, grab myself an iced coffee from Dunks, and drive up to the show.  Trainer A and her teen du jour took care of loading and leaving this morning since I did the prep and packing on Saturday.  The ride times were kind of cruel.  Her teen started at 10am, finished at about 1:30pm (her very first three phase), and Trainer A rode at 4pm.  Ew.

I played groom all day.  I kept Theo cool, bug free, and happy as he waited all day for his turn.  I cheered for our teen as she went forth and conquered her first cross country course.  She was technically eliminated when her pony refused one jump three times, but she got him over it on try four and completed the course.  Since it was a schooling show, she also finished stadium.  It was quite the learning experience for her, needing to put all three challenges together in the span of a couple of hours, but she's already excitedly talking about her next show.  Next time, a number and not a letter! 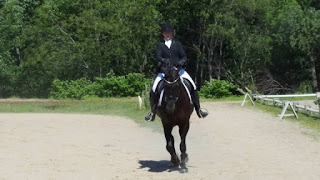 Theo in his most conservative turn out: white saddle pad and silver clinchers browband

Most of my day was spent either hand grazing Theo or keeping an eye on the ponies while they were tied to the trailer, snacking on hay.  The boys were very good in tight quarters.  We had one incident when the canopy the teen's family were using for shade pulled up from it's stakes and took flight right at the pony Juicebox.  Juicebox was, understandably, completely freaked.  Theo was also not pleased.  Trainer A was close enough to yank Juice's tie loose before he could hit it.  I was too far away and Theo snapped his breakaway halter when he flew back. 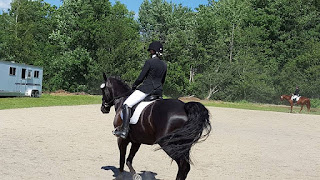 So it did it's job, Theo was uninjured, but he was also loose and rather freaked.  Well, shit.  Fortunately they had the canopy under control and being collapsed very quickly so he didn't bolt.  He trotted a few steps, then stopped to check out the grass.  I pulled off my belt and made a show of crinkling a wrapper as I walked over.  That little butt head snorted, shook his head at me, and trotted off a couple steps.  Another rider heard me calling out 'loose horse' and headed him off before he could make a break for freedom.  I threw my belt around his neck and another helpful stranger handed me a halter.

I love eventers.  Everyone dropped everything to come help me catch my horse with smiles.  Of course there was a loose horse, it's a horse show.  It happens.  No harm done and Theo  went right back to his haynet like nothing happened. 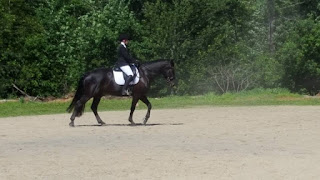 Very chill, almost like he knows what he's doing

I'll admit, there was a shift in the tone and culture when the eventers finished up their day and the dressage crew started to show up.  A lot more white breeches, a lot more white polos, a lot more snark.  It's a very small schooling show so a certain amount of 'big fish in a little pond' going on.  Let's just say, these weren't faces I see at the big, sanctioned shows in the area.  While the eventers definitely have a vibe of being in this together, the dressage crew was there for just themselves.  It's unfortunate. 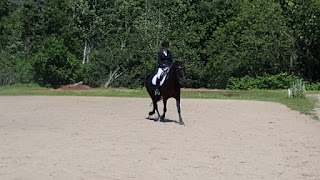 Trainer A was a bit anxious.  It dawned on me that she hasn't shown this year and last year she only did Intro.  How did that happen?  But once she was on Theo, everything was fine.  We'd worried about whether or not he'd work for her once the pressure was on.  He's a very emotional ride and they're more prone to bickering.  We didn't need to worry.  86*, waiting all day, brutal sun with very little shade, and he still went into the ring and went to work for her.  The occasional comment, but nothing like what he's capable of.  They had to take breaks in the shade while his respiration came down, but she timed her warm up well.  They went into the ring like the pair of old pros they are.

Yes, he wanted to melt by the end of the canter work.  You can see him going 'please can I be done?!', but he didn't throw a fit.  He took her word for it that the flowers were not, in fact, going to eat him.  This is a huge step forward in their relationship.  They got a 62%.  I thought some of the marks were a hair harsh, I thought it was more of a 64%, but I'm trying not to get in the habit of quibbling over a percentage point or two.  We're close enough that I feel like the judge and I saw the same test.  She seemed quite happy with them and there were a lot of 7's.

The attempted breaks at the canter kind of killed them, but it's Theo in July.  We knew it was coming.

Trainer A said she had fun and that she could be talked into showing him at Second next time.  When the temperatures are lower so poor papi isn't begging for mercy by the end of his six minute test.  Yay!

It was a good day.  Trainer A had fun, Theo looked quite proud of himself on his walk back to the trailer, and I got to spend all day being the owner.  Which means I smile, say supportive things, and write the checks.