Background:  I am rather hourglass shaped.  Which is a polite way of saying there's junk in the trunk and some serious business going on upstairs as well.  I wear a 34D bra and at 5'2", that's not a small percentage of my total mass.  Most of my life I've been fine with a sports bra and occasionally even a regular bra while riding.  Posting isn't that bad and when you never sit the canter?  Bouncing can be managed.

Never, ever wear a front clip bra while riding.  Yes, I speak from experience.  Explaining to the older, angry German man that I needed to step out of my lesson to duct tape my broken bra back together was a unique experience.  I snapped the little plastic clip in the midst of a jumping course.  Bouncy bouncy.

But now a days I spend a lot of time with my tush in the saddle and the bouncing is a problem.  Gods help me if I forget to pack a sports bra and even with that, there's some unseemly jiggling going on when I sit the trot.  I needed something with some real substance and staying power. 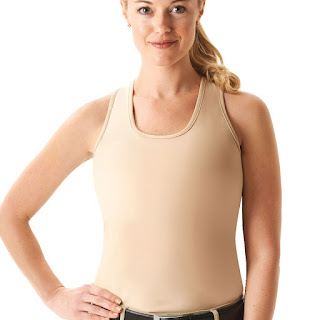 The Product:  The Cheeta Trotter bra is a compression bra with a downward facing zipper in the back.  It's not like your usual pull on bra.  There's a video for getting everything settled where it should be and you do not lift the girls up to their usual position.  The model I chose is the one with the built in tank top in nude.

Review:  This thing is substantial.  The tank top part is sturdy and stays tucked into my breeches nicely.  The bra, though.  That thing is intense.  I ordered a medium based on my rib cage being between 34 and 36.  When it arrived, I noticed right off the bat that this thing isn't kidding about the elastic.  There was much wiggling to pull it on. 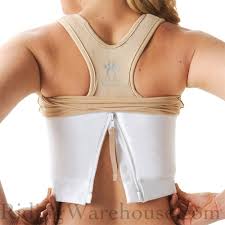 The zipper has a long tab on it so you can zip it on your own without too much trouble.  There's a single hook at the end to keep it from unzipping at an awkward moment like jumping a course in front of an angry man with a smoker's cough and a heavy accent.  It's definitely weird zipping something down, but it pushes the girls down and then crushes them into place.  Seriously, it took me a second to figure out breathing.  It's not uncomfortable anywhere, but you are definitely aware that you're strapped down.

My shirts definitely fit better with it on and I expect my jackets will look nicer with a solid inch taken off of my chest.  In the saddle, I finally had stability in the sitting trot!  Sure, I can perceive movement if I really focus on it, but it's certainly not bouncing.  All of my mass is squished in where it belongs, over my center of gravity.  There's a lot less distracting flopping going on.  It didn't interfere with my ride at all, but it does take some getting used to.  This is the first bra that successfully contained all of that mass while sitting Theo's working trot.

These things are not cheap.  Something like $67 through Smartpak a pop.  I intend to buy more.  It is such a relief to sit the trot and not have a bunch on unmanageable, sometimes uncomfortable movement.  I can't say it's a comfortable bra, it felt nice to take it off (and try to fluff the girls back up to their usual dimensions, poor things), but if you've got some serious business going on in the area of the chest, this will do the job of keeping everything sleek and still even during the sitting trot.  I recommend it.
Posted by Catie at 7:44 AM