Background:  Theo breaks out in hives and/or welts when the bugs get after him.  He's also a total princess.  Combine that with the vicious array of bugs you get in New Hampshire and you have a recipe for an uncomfortable, pissy pony.  I'm pretty much willing to try anything in the heart of bug season to keep him comfortable. 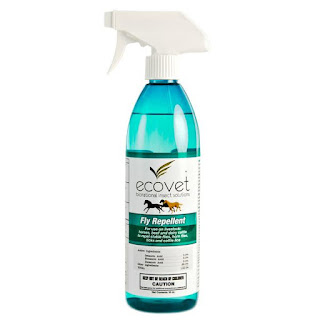 The product:  Ecovet is a fly spray that acts very differently than the stuff we usually use.  Regular fly spray keeps the bugs from biting.  Ecovet claims to mess up the chemical receptors in the fly, causing them to not be able to locate your horse and sometimes die.  It's based on amino acids evaporating off of your horse and making a bit of a cloaking mechanism (Star Trek reference ftw).

I got a free sample from SmartPak.  It's more expensive than my usual fly spray but you're supposed to use less, so it probably evens out.

Review:  This stuff is scary when you first read the instructions and reviews on line.  May cause respiratory distress, use it outside and upwind, yadda yadda.  I've heard multiple reports of horses going into fits of wheezing and trouble breathing.  It took me a couple days to get up the nerve to even try the stuff.  Also, it's described as horrible smelling so definitely don't do it in the barn aisle.

I wanted to take Theo out for a trail ride/mad gallop to avoid the bugs and thought it would be a good time to see if Ecovet was the miracle product people claim.  It was also breezy, so seemed a good day to apply the product without killing my horse.  I took him out in the parking lot, parked him with his face into the 10 mph breeze, and applied as directed on the bottle.  I got his chest, legs, and belly from midline down.  I was expecting it to smell like pure death.  It doesn't.  I didn't like the smell, but it's not like a skunk or anything.  More odd and unpleasant than anything.  I can imagine it's overwhelming if sprayed in an enclosed space.  No wheezing or coughing from Theo, just one big lip curl.  The breeze did it's job.  I tacked up as usual, noted my horse now smelled funny, and headed out.

It did NOTHING.  It was no different than my Ultrashield and frankly might be worse.  Deer flies were on us while walking down the road.  The trail ride was our usual mad dash.  The flies had no problem finding my horse and latching right on.  Whatever it's supposed to be doing, it doesn't work on the biting flies in NH.  It was too breezy for gnats so can't tell you if it worked on those, but frankly, I wasn't impressed.  If I'm going to go through all that trouble to apply the product, I should be able to see at least some improvement.  I gave the rest of the sample to the barn to use on a mare suffering from sweet itch, see if it helps her.  It's useless for Theo.

So no, it's not a revolutionary break through.  If your horse isn't allergic to pyretherin, stick with the traditional stuff to handle biting flies.  I'm really quite disappointed because I'd read reviews where it really made a difference on trail rides.  It might be regional and depend on the species.  If you've got the awful, yellow/orange deer flies we have in New England, save your money.

It looks like the trails will just have to stay closed for a bit longer.