I swear New Hampshire is designed to keep you in the indoor.  Three to four months out of the winter it's too icy/cold/snowy to be outside.  The footing is dicey and the piles of snow alongside the road make it dangerous to hack out.  Cars are dumb and anything that limits their visibility as well as taking away my emergency escape route is a no go.  The outdoor becomes an ice skating rink due to snow/ice/refreeze and is closed until spring thaw.

Then we get a glorious two month window where we can go outside!  So long as it's not raining and the melt is done and mud season is over.  We don't want to tear up the trails or splash through ankle deep mud designed to tear off shoes.  But we go out and adventure and shake off the winter doldrums for a glorious eight weeks of really unstable weather interspersed with rides outside.

And then the bugs arrive.  Oh, the bugs.  In waves.  Species after species making the outdoors absolutely miserable.  The first wave is the black flies.  They swarm and bite something fierce.  Theo reacts to them and looks like a pineapple if he doesn't have his fly sheet, fly mask, and fly spray.  Then we get a short break before the mosquitoes start to peak, quickly joined by the midges, deer flies, horse flies, swarms of gnats, and any other type of biting insect you can imagine.

Our outdoor is surrounded by woods.  Very pretty, provides some protection from the sun so you're not baked, but absolutely unusable most of mid-June to mid-July except at the hottest hours of the afternoon.  You can't walk because the gnats will swarm you in a cloud if you're going that slow.  I have become proficient at coughing and sneezing up gnats in as effective a manner as possible.  Haven't figured out a solution for the ones that get in my ears other than to shriek and flail.  It's really beyond words awful.  Theo needs a fly mask with ears to run through his tests in the large arena after warming up in the indoor and our free walk is usually a series of head shakes and snorts. 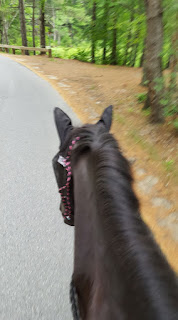 No saddle, no bridle, no problem

Once the clouds of gnats and little biting flies disperse in mid-July, we can start to use the trails again, but only at speed.  Horse flies and deer flies will turn Theo into a bloody mess in minutes if we're going too slow.  For anyone unfamiliar with this variety of torment, they're big flies that bite in a way that feels like you've been stabbed.  They leave a bleeding mark behind and, if your horse is sensitive, it can result in a good sized welt.  Horses really, really do not react well to this.  I've seen horses almost flip over when swarmed by deer flies.  They get completely frantic trying to make the biting stop.  Most of us do the rail bed at a canter for our trail rides during that season.  We can get away with trotting rough sections which makes trail riding a possibility, unlike in the gnat season where it's just impossible, but it's not exactly relaxing.

September we start to get relief and can start going out.  After the first freeze in October we are usually on the trails as much as humanly possible because it's our short window of no bugs, no ice, no mud.  The rest of the year it feels like an epic battle with Mother Nature to get out of the indoor.

My poor horse is reactive to bugs, so I'm constantly sinking money into his armor.  I just ordered the Amigo with No Fly Zone to replace his fly sheet that's on it's third season.  Got to say, the Weatherbeeta Airstream held up for three seasons of almost constant use and is getting replaced only because some of the velcro is starting to wear out and a tear near one chest buckle.  I seriously considered getting him another one but wanted to try the No Fly zone.  I'll keep it as a back up because fly sheets need washing but I can't leave him naked.  We left him naked for a couple hours one day this week and he came in covered in itchy, tiny welts.  They really got him behind his shoulders where he can't reach and that's unfortunately under the saddle pad.  Not a happy papi.  Lots of treatments and soothing baths for him. 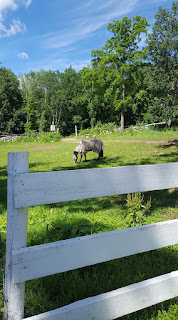 Crusader fly mask every time he's outside at this time of year.  Either his heavy duty long nose version for pasture use or the lighter version that goes over his bridle.   If he manages to get his mask off, I usually spend a couple days cleaning out his ears and treating the damage.  There's a reason he's not clean clipped.

Flyspray of choice is the Ultrashield in the red bottle.  I buy it by the gallon.  If we're getting into the 40's or warmer, he gets sprayed.  It keeps the ticks off of him (also a huge problem here and lyme is endemic) as well as the worst of the biting bugs.  I got a free sample of Ecovet and I'm going to try that tomorrow.  I've been really hesitant due to the reviews of it being a respiratory irritant.  Again, Theo is a delicate fucking flower and I don't want to set off his reaction to inhaled irritants.

Seriously, how is this horse still alive?  He reacts to EVERYTHING!  Allergies, bug sensitive, ulcers, unstructured carbs, it's a wonder he's made it to 13 years old.  Though it does explain why he seemed so angry for so long.  He was itchy, congested, and his stomach hurt.

But if anything can keep him from getting chewed up?  I've got to try it.  I've heard Ecovet is a miracle worker for the midges and those are hard to control with a fly sheet, especially now when he's out on grass 24/7.  The worst of the deer flies is coming and I'm pretty willing to try anything to keep them off of him.

New Hampshire.  Beautiful to look at, not so lovely to actually experience.
Posted by Catie at 9:18 AM