Today was my third dressage school since my lesson with Mary, my first lesson with Trainer A since riding with Mary, and dear ol' Theo is still working in his new frame.  Right on schedule, he decided to tell me 'nuh uh, no way, I quit'.  This is part of why a lesson with Mary every other week will work better for us.  My pony thought this new idea was a one off, a new exercise that would soon be forgotten.  Today, when he said 'F-U mom I'm a giraffe and you'll get tired before me', I said 'hi, this is a draw rein, flexing is no longer optional'.  Oh, he was not pleased.

It's interesting how things plug together.  Theo's always been pokier when tracking right.  He's not a fan of sitting on that weaker hip.  When he finally flexed, I noticed he has to sit on his inside hind.  I know theoretically that a correct bend gets the weight on the correct diagonal pair of legs, but it's different when you actually feel it.  Or in this case, fight through the resistance to get some really lovely work at the trot while tracking right.  This may be that last piece we were looking for to get him evenly developed behind.

He's accepting life in the thin loose ring snaffle with reasonable grace.  And today I saw actual foam at the corner of his mouth!  Not his usual drool, but foam!  And his mouth was moving!  Not always in a good way, a lot of it was 'FU FU FU', but at least it's movement.  It's the start of a conversation.  We had moments of softness that were lovely and when we took a break to track left?  So nice.  But we also had an all out bucking temper tantrum when I asked him to flex and then ignored his protests.  That draw rein is so powerful.  I just hold steady, don't move a muscle, and wait for him to be done as opposed to me struggling to win an arm wrestling match with a thousand pound animal.

That power is addictive.  There's a reason people get super dependent on those things.  My rule is to only use the draw rein under supervision so I don't get carried away or go too far.  That also limits me to once or twice a week.  The rest of his rides are done the much harder old fashioned way.  The rides with the draw reins set the stage to take his resistance head on and have a good chance of winning.

Theo doesn't like the tables being turned like this.  Suddenly he can't just force me to accept his view or lure me into letting him fake the flex because my shoulders are ready to give out.  He's trying all sorts of new evasions right now, including diving down in the contact and retracting his neck while stomping his feet.  I think this is a fight we should have had a long time ago rather than just skirting around the issue.  It's Theo, he isn't going to just slide into doing something in a new, more difficult way.  He's going to throw a couple of all out temper tantrums on the way.  I'm just glad he's doing it now and I'm hoping he's done having his teenage angst by my next lesson with Mary on the 4th.

I expect another week of temper tantrums before he settles into the idea that this is his new reality.  He really does try to bully anyone that asks for things he doesn't like.  Alas, poor Theo, I'm not one that's easily bullied and I have tools that can give me the advantage.  But I'll make it up to him.  We are going to go do a two phase on the 6th so he's got some jumping lessons coming up.  We don't want him to get sour, so we need to mix it up.  Yes, he still has his rides where we discuss submission to the bit and how it is not a suggestion, but then he can go jumpa da jumps. 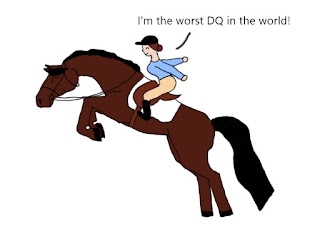 It's been too long.  My jump saddle is all dusty.