Theo's leaser is off for eleven days in Italy.  I can barely stand the jealousy.  I guess her parents are out there for a month and rented a house, so she's going to go crash with them and play tourist at all of the wineries.  Again, my jealousy has no bounds.  Today is a high of 54*, it's overcast, and it's raining.  Again.  She's posting pictures of beautiful sun and scenery.

Anyway, with her gone for eleven days, I had about thirty seconds of worry that I'd have trouble keeping Theo in work full time.  That's two more rides a week and the hubby is on a work trip, so I've got the home front to manage.  Turns out that's not a concern these days.  Theo's dance card is always full.  Today he's at a clinic with Trainer A, getting some new eyes on the ground from an upper level rider that specializes in Lusitanos.  It's a great match for my short backed, upright necked horse.  Mostly it's because another client of hers loves going to ride with this guy and Trainer A figured so long as she was going, she should bring a horse.  Theo was her pick.

She's been describing Theo as a doll during their rides as of late and I've been considering picking up a second training ride so they can totally gel and she can move him up for me.  That's the way these things usually go, right?  Your horse moves up, then you move up.  I'd love to have her put those first miles at Second on for me so I can go down center line totally confident.  And it would be great for her resume to take a client horse out and get some scores. 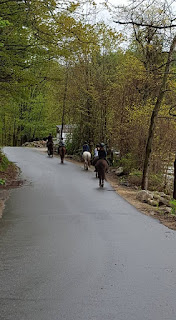 Theo leading a group out for a ride.  I'm the one behind the camera.

And Saturday he had a date with a teenager that needed some confidence over jumps.  No one in the barn is as chill and reliable over fences as mi papi.  Grab mane and hang on, little girl, that's all there is to it.

And then we're picking out shows for his leaser, assuming she doesn't just stay in Italy forever (I'd consider it).  She wants to move up to Intro C and do her first show over fences, so we're looking at one h/j show at 18" and one dressage show.  We think it would be wildly unfair to have Theo swap levels at the same show (and possibly disastrous for his leaser when he starts doing simple changes in his intro test), so I'll go along as moral support/groom. 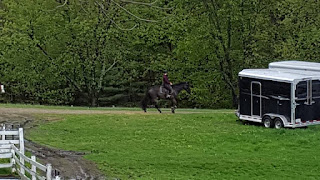 Theo taking his leaser out for an adventure

I feel like I'm in danger of scheduling myself off of my own horse.  I really enjoy my one lesson a week on the pony parade.  It's been really good for my riding and my confidence.  But that's a trip to the barn where I don't ride Theo.  Three of his six rides a week are with other people.  And if I add a second training ride so Trainer A can take him out and show him, he'll be up to four.

I'm not sure how I feel about this.  I know his leaser is temporary, probably only until the fall.  I just want her to have a fantastic summer and make some progress with a horse where she can develop a relationship.  And it's been wonderful while I learn to commute.  If I've had a day where I just can't manage, it's fine.  Theo's getting lots of love and work.  But I'm so used to being a full time rider.  I'm not sure I'm comfortable being part time.

I logically know it'll work just fine.  Trainer A rides him at 8am, so I can still ride him after work on those days.  He won't mind a bit, especially if we alternate so she schools him in the sandbox and then I go jump or have a little gallop.  I can still ride my horse four days a week, including two serious business rides.  His leaser doesn't even canter much on her day with him, it's a borderline day off and once the bugs break, she'll probably be out of the ring as much as possible.  I'm not worried about him getting pounded into the sand.  Trainer A typically gets her 'work' part of the ride done in 30 minutes or less, she's not the type to grind on a horse.  I'll typically do the same, schooling hard for about 30 minutes and then going for a wander.  I like to call it conditioning, but I'm mostly wandering.  And jumping random things.

This might be part and parcel of having an office job.  If I try to ride him six days a week myself, I'll burn out.  If I have help, I can continue to have the job that makes it possible to afford him (and his stuff) without the risk of me having a complete melt down due to lack of sleep and never seeing the hubby.  I just need to figure out if I've pushed the pendulum too far the opposite direction.