The power of straight

There's this thing a lot of people talk about.  A bunch of dudes in Germany wrote it once upon a time, they thought it was important.  It's almost a religion for a lot of the dressage-y types. 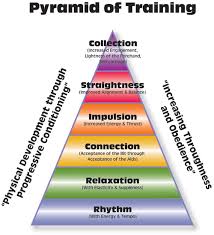 Yeah, that thing.  It's a nice, simple thing, but it surely can't apply to all horses, right?  RIGHT?

We all know training isn't linear.  You improve something, then you go back and tweak something, then you hop ahead to add something new, then go back to clear up something that popped up, repeat.  I'll admit to taking this whole pyramid thing as a neat idea that has very limited application in real life.  You learn it but it doesn't apply in real life.  Especially with a stubborn, evasive draft cross that isn't at all a purpose bred dressage horse.  Theo hasn't read the manual.

Guys, I was wrong.  Again.  Training may not be linear, but that pyramid exists for a reason.

In Trainer A's clinic with mi papi, she got the book thrown at her for not locking down straightness before asking for collection.  In our attempts to unlock his resistance to any kind of bend in his upper neck/poll, we'd been turning Theo into Gumby.  Which worked for some things.  He relaxed, settled into the bridle more, started to give us lateral work.  He stopped using his under neck and started to develop a topline.  But that was all relaxation and connection stuff, we never went back to straightness.  We threw some energy in and then said 'collect, Theo!'.  We skipped from impulsion to collection.  The classically trained fella was having none of it.

Who cares if he's in front of the vertical right now?  Get his shoulders in front of his haunches, get his neck straight, and ride him that way.  No, he does not need to practice bending through his neck, that's half of your problem!  Look at him break at the C3 instead of the poll!  Keep him straight and keep his poll up!  Slow, steady, relaxed, forward, and STRAIGHT.

By gods it works. 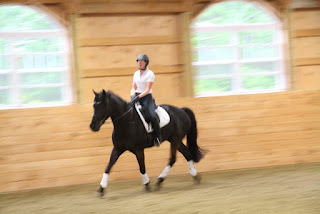 Yes, that's Theo with Trainer A in the saddle at her clinic.  Look at that stretch and bounce!  She brought it all home and promptly threw the book at me.  Ride him straight!  Shoulders in front of haunches, neck straight, poll at the highest point.  If he's breaking at the C3, that's not softening, that's evasion.  Fix it.  Slow the rhythm, relax, settle into the connection, add energy, get him truly straight.  Forget his muzzle, just keep him relaxed, straight, even in the connection, and forward forward forward.

It's been a game changer.  His rhythm in the trot has dropped by a full beat per minute and sometimes two.  We are now shifting in and out of lateral movements without him falling on his face.  He's not a huge fan right now because he's having to sit evenly on both hind legs and can't break in the middle of his neck to fake flexion, but he's getting the hang of it.  I have to think of moving his shoulders, not his haunches or barrel or neck.

His haunches are on a straight line, pushing us up and forward.  The power runs forward through his body so long as there are no kinks in the hose.  His shoulders I manipulate from side to side without the haunches leaving that straight line and without letting his shoulders pop out and block the hose.  I do not ask for bend in his neck.  Do not let the hose kink in the neck.  Flex is not what I thought it was.  If I can see his eye, that's plenty.  I don't want a change in the middle of his neck.  If I have a bend in the middle of his neck, I've lost the shoulders.  Pressure in both reins, cycle back through to the haunches.  If the outside rein is light, the shoulders aren't where they belong.  Inside leg to the waiting outside rein, bring the shoulders in front of the haunches and straighten the neck.

It's been hard for me because I hate having his muzzle out that far and my brain keeps screaming that I need to bend in the circles.  To do this dressage thing correctly (and move up through the levels), he's going to have to give through his poll and that's been very difficult for him.  When I give him massages, his poll is usually very tight.  Always has been, even before I started riding him seriously.  He hated having his poll touched when I started.  I think he stores his rage there.  Once he lets me work my fingers in, there's usually very dramatic yawning and chewing and stretching, particularly on the right.  He really, really struggles to flex left through the poll.  It's painful, but the vet says it's just tight, not arthritic.  Chiro agrees.  Massage therapist thinks he has rage issues.

Taking away his evasion has finally broken through that resistance.  In my last lesson I asked him to give me a little flex to the left and he did it.  Neck didn't move, but I could see his left eye.  He was calm about it, just offered the adjustment.  With each ride, he's comfortable bringing his muzzle in a bit more.  Just a bit, a fraction of a degree, but it's adding up.  He's learning to travel with his poll as the highest point and to flex through those previously locked muscles.  And at his last massage, his poll was less tight and painful.  Bit by bit, he's becoming supple now that he doesn't have a choice.  And as he gets more supple, he's less resistant to the idea of traveling correctly.  I've heard dressage referred to as yoga for horses and it looks like it's working.

It's been an interesting couple of weeks while we back up and fix this basic that we somehow blew past.  Theo's had some temper tantrums because this is new and hard and his evasions are suddenly being stopped, but nothing severe.  He likes being powerful and once he's rolling, he usually has that cheerful expression from the clinic photo.  Trainer A laughs at him when he's warmed up and hit his stride.  He loves to show off and let everyone know how big and powerful he is.

So I once again have to admit that I was wrong.  The training pyramid is a thing for a good reason.  While training isn't linear and it's not a case of completing a level and moving on, it's a checklist that needs to be revisited frequently and in that specific order.  The same way a tiny shift in my position changed everything about my riding, this tiny shift in how I ride my horse is rippling through everything.  It's going to be months before we see the full results of the change, but after three weeks, I'm very excited for what the future holds.  He looks like a real, honest too goodness dressage horse!
Posted by Catie at 9:41 AM