I think I could have a blog that was nothing but product reviews at this point.  This episode is for my jumping saddle, the Frank Baines Evolution. 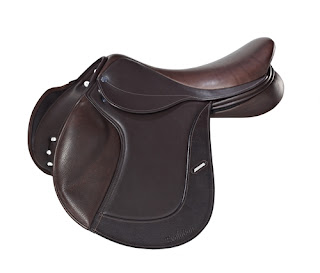 Background:  When I started riding Theo, I used his dressage saddle from the lesson program for everything.  This included my reintroduction to jumping and even a schooling show at 2'3".  After jumping mi papi around in a saddle with a high pommel and a high cantle, I ended up sitting on my couch with a bag of frozen peas in my lap.  Bruising of the pubic bone is serious business.  My Perch cross partner likes to make a big move over fences and a dressage saddle was just not doing the business.  I tried a Wintec but discovered his back is very, very straight and needs a specific tree shape.  Research and some help from my local saddlery put my butt in this saddle.

The Product:  Frank Baines is a saddlery in England.  They've been around a good while and have the usual string of professional endorsements for their saddles.  They offer dressage, close contact, GP, and even an eventing model.  Theo's dressage saddle was a Frank Baines and the name came up during my search for saddles that fit the flat backed horse.  The Evolution was pointed out to me as the flatest tree in the Frank Baines close contact range by my saddlery.

The Evolution is a close contact saddle with calfskin covered flaps and a calfskin seat.  It has gussets front and back, a mid-sized knee block, and a small calf block.  It comes in several colors and can be ordered with the welting in a color such as red, blue, or green for no additional fee.  However, since it's from England, shipping can be a beast.  I got mine from a dealer state side which helped.  It's about $3K new, which I had to do since it had just come out at the time that I purchased it.  You might be able to find some used in the not too distant future.

Review:    The first time I sat in this thing, it was love.  As Trainer A called it, it's a pillow for your a$$.  I call it butt candy.  The seat is wide and softly padded, it's just nice to sit in.  Trail rides in this saddle are no problem, I've gone two hours without my butt getting sore.  I love calfskin, even if it scuffs if you so much as look at it too hard.  Nothing sticks me to the saddle quite like it.  The knee block was considerably bigger than what I was used to, but not distracting in appearance.  I'm only 5'2" so I don't usually end up using the blocks on a regular saddle anyway, but these are positioned well enough that I do end up using them on occasion.  The saddle I tried was their nut color and rather light red for my taste, but the welting/piping in red was a neat touch that I liked.  It hit all of the check list items I'd gotten from the saddle fitter and sure enough, fit his flat back like a glove.  I got a MW with a 17" seat.  The saddle fitter loved it and it was mine. 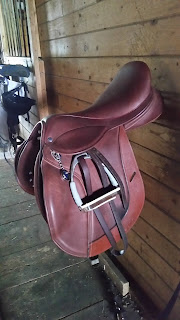 Six months later and I still love it.  Break in was nearly non-existent.  We were able to ride in it for lessons pretty much from the word go.  Covered flaps require more delicate care so I've only hit it with the lederbalsam a couple of times.  Most of the time I just wipe it down with a slightly damp cloth before putting it away.  It's darkened up nicely and picked up a lovely patina.  It's not the havana color I dreamed of, but it's flattering.  Just more red then I'd usually have for a jump saddle.  It needs a bridle and girth with some red in it to match.  My tack doesn't really match. 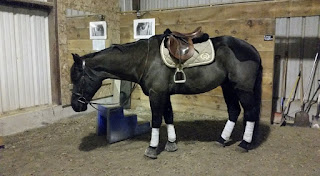 I flat in this saddle regularly and I've found it's not extreme in throwing my balance forward.  I can flat around with an upright position without fighting this saddle so long as I drop my stirrups down appropriately.  Trainer A, having a more normal length of leg being about 5'5", noticed the calf block interfering with her ability to get her legs down and around him when she dropped her stirrups down, but it hasn't affected my short legs.  A 5'10" man rode in it and really liked it, said that he felt very comfortable and not cramped.  It's not meant to be a flat saddle so I can't recommend it as a GP type saddle.  It's really meant to be a jumping saddle.

Over fences it's a secure seat and I've had no problem with rocking and rolling.  Any shift in my position is my own fault, not the saddle.  Trainer A hasn't noted any problems with this saddle in terms of my position and liked where it put her legs when she sat in it.  No chair seat!  Calfskin helps to keep me in the saddle when papi puts a little extra spice in his jumping.  The balance point is pretty central and allows for a seated position as well as staying in half seat.  It's a nice, open saddle that doesn't put you in a particular spot which I like.  Not everyone likes that.  It is most definitely not a seat belt type of a saddle.  It won't keep you in place through a massive series of bucks or anything.  I personally would take it cross country at Training level, but I also did Training level in my flat as a pancake, no blocks at all, equitation oriented Passier Precision.  I'm crazy. 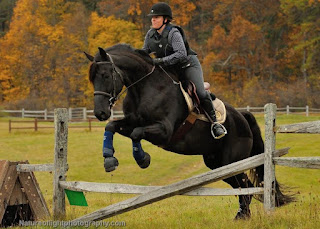 The calfskin is delicate.  I have to guard this saddle with my life.  I'm also not the biggest fan of the leather they used on the billets.  The finish cracked during break in and they look more worn then I'd expect at just six months, even if I use the saddle at least five times a week.  I didn't order the short flap so the blocks aren't quite where they should be for my stubby legs, but other riders find them very well positioned.  I find them close enough to keep me in place when things go wrong. I also get some weird noises from my stirrups on occasion.  We're still working on that.  It's nothing structural, the saddle is very secure, but there's a weird sound that keeps showing up.  Makes Trainer A crazy.  It's probably more related to my stirrup leathers, but still worth mentioning.

I've also had to slap a wither relief pad under this saddle, the pommel doesn't give a particularly generous amount of clearance and Theo is a princess.  No wither pressure of any kind allowed ever for him.  For a shark fin TB, I'm not sure it would work.  But then again, the tree probably wouldn't suit that type anyway.  These saddles really suit flat backed horses with wide shoulders.

If I had my choice I would have ordered this saddle in the havana leather with blue welting and short flaps, but Theo's back needed help immediately and I didn't want to wait for a custom order.  I'm impressed that those options are all no extra charge when ordering a new saddle.  You can even get velcro blocks at no charge if you order the saddle.

Conclusion:  Love this saddle.  It's comfortable, it keeps me in a good position, and it's attractive.  Theo also loves it, going noticeably better in this saddle compared to other saddles.  It broke in pretty much instantly.  It's well loved by a variety of body types.  Not well suited for horses with curvy backs or super high withers and not good for situations where a saddle needs to take some abuse.  I don't recommend it as a GP saddle since it can interfere with a longer stirrup position, but it's fantastic over fences.