It's been a long time since I did a jumping clinic.  I'll admit, I was a bit nervous.  While we've been doing gymnastics, Theo and I haven't done a proper course since our three phase back in the fall.  Most of our gymnastics of late have been set at about two feet, since we're working on the foot work, not the actual jumps.  I was in with a group that worked at 2'6", which Theo and I do at shows, so I didn't think we'd be overfaced, but you never know.

And it's still winter with many ponies going stir crazy.  Trainer A has kids popping off almost daily right now.  We had several falls and near misses during the clinic.  She's ready to take up drinking, I think.  Our lesson yesterday didn't go overly well with Theo dragging his toes and acting like he was just tired and done with the cold.  I arranged for him to come into the barn last night so he'd get a solid night's sleep indoors.  It was ten degrees warmer today and I saw him taking a nap out in the sun this morning.  Being well rested seemed to help and he was perky when I got him tacked up.

With some falls pushing the time table back, my group was supposed to warm up by walking up and down the path between the barn and the indoor.  Theo was happy enough to walk up to the barn.  When I turned back to the indoor, he clearly felt betrayed.  Go back to the ring?  Really?  No way!  He started backing up and falling out the left shoulder, refusing to go back.  Since we had a clinic, I just kept that open right rein and kept kicking, refusing to let it escalate past him walking sideways and backwards.  I did not want to try to jump with him ticked off at me.  He eventually gave up and walked down to the ring like a gentleman, but the other riders were pretty unnerved. 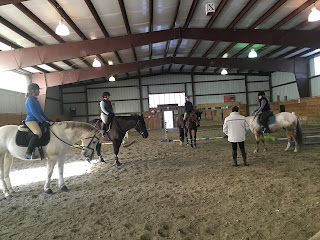 If anyone in New England has a chance to ride with Brad Giuda, I say do it.  He's positive, he's friendly, he doesn't yell, and his theory is both moderate and sound.  There's no gimmicks or wildly unique ideas to his system, just lots of sound fundamentals.  He wants a horse elastic both laterally and longitudinally.  He believes in jumping horses being able to do all of the lateral movements, collect, extend, and stay on a steady contact.  There was a lot of eyes up, land in your heels, and no ducking going around.  It was very pleasant and I had an awesome ride, I'd totally ride with him again.

We started out just getting our horses marching and bending through the turns and through a figure eight, making a clear change of bend.  Then we were collecting and lengthening the trot.  Theo was feeling fantastic and gave me some really solid lengthenings.  We got hammered a bit on the collection since I never seem to half halt quite enough.  I feel like I'm exaggerating when I'm doing it correctly.  But then papi would push into the lengthen and felt just amazing.  He had some trouble with the figure eight since we were in a line and he was behind the pony.  He started to curl and temper tantrum.  I had to pull him out and off to the side so he could settle.  He was not happy having to shorten his stride for that long.

We warmed up with a single vertical, which became a bounce, which became a bounce to a one stride.  Theo was pretty reved after the warm up and gave me a flyer going in once.  I actually had to do the halt, back up, then represent with him to get his brain back in his ears.  Once he did that, he came in just as perfectly as we could ask for.  The courses he did were lovely.  We cantered everything in a nice, steady rhythm.  If the distance wasn't quite there, he was adjustable enough to move up and make it work, or shorten up and add.  When I remembered to ask for my lead in the air, I got it.  When I forgot, he offered a change but it wasn't clean.  I'll certainly take it.  I had to ride the rollback pretty aggressively once and after my course said 'that was kind of rough, very jumpery' and Brad's reply was 'yeah, but you hit every distance'.  Good point.  It wasn't a flawless hunter round, but Theo was jumping very well and all of the jumps worked out.  I don't think we touched a rail all day.

Brad remembered Theo from last year, when someone else was his rider.  His exact words were 'oh, yes, I remember him'.  It didn't sound like a fond memory.  While we were doing our lengthen trot, I heard him call to Trainer A 'he looks fantastic!'.  At the end of the ride, he told me that he was very impressed with what I've achieved with Theo, that we had clearly worked something out and that he looked wonderful.  I probably floated back to the barn.

Today was fun and easy.  Brad offered to pop the fences up higher but I was good at 2'3".  No reason to overface us when we had finally, finally found a jumping groove.  We cantered in a steady, appropriately powerful way, jumped, and cantered on.  No kicking, no fussing, to tranter.  It was fun!  I could focus on the turn and approach and seeing the distance because I knew I had enough horse to make whatever changes I needed.  It wasn't until I was off of him and talking to the other girls that I realized how relaxing and fun that was.  All of our months of sweat and tears and work to improve the canter and make him strong and adjustable have finally paid off.  I was comfortable and felt perfectly safe cantering down to those fences.  I would have been comfortable with the fences another two holes higher.  I had enough horse and the horse was completely with me.

Trainer R is doing a pre-purchase on another horse tomorrow.  It looks like I need to get my finances ready for a purchase sooner rather than later.
Posted by Catie at 3:54 PM