Some horses are more challenging to read then others.  Some horses wear their hearts on their sleeve, showing you with posture and body language and expressions just how they're feeling about everything.  Some horses are stoic, keeping their feelings tucked away.  They don't really seem to change regardless of the situation.  They're a bit more frustrating since it's hard to tell when they're happy or enjoying themselves.  It's also hard to tell when they're getting ready to blow.

Then there's the complicated horses.  The ones that react, but they don't quite fit the script you get in the book. 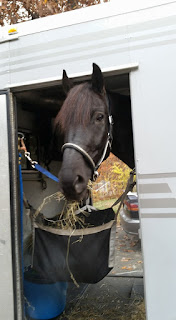 Theo is a jackass.  He kicks, he bites, he pushes into people.  He's a bully when he thinks he can get away with it and sometimes just because his target isn't paying enough attention to stop him.  He's not social, he doesn't want attention, he just wants food and to be left alone.  He sits on the cross ties with a sour look on his face or trying to paw, wanting to know why he's not in the field.  He doesn't want to work and it takes a 2x4 to get his attention once you're in the saddle. 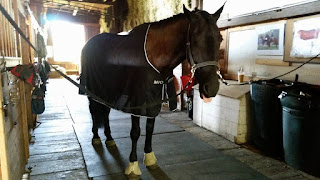 Up to pretty recently, that description was what I would have used for mi papi.  With increased exposure, I've started to notice that what we're seeing doesn't quite line up with that description.  Mister Bad Ass Crabby Face loves hugs.  Nothing makes him happier than putting his forehead against my chest while I rub his ears and tell him what a sweet boy he is.  When stressed in our last lesson, he did the same thing with Trainer A, making her melt.  He just needed a hug.  This is pretty new for him.  He has always liked Trainer A, but seeking her out for hugs is new.  He took a deep breath while we both loved on him and told him how smart he is, then he went back to work.  He puts his ears back and reaches for people pretty regularly, but they're not pinned.  He wants ear rubs but it makes him look ticked off and people dodge his head or correct him.  Including me until I figured it out, much to his delight.  Finally, some one had figured out he needed a good scratch, not a correction.  Sometimes the pushy head isn't an attempt at mugging me for treats.  Sometimes he needs some attention and a big crest grooming session.  It takes experience to tell the difference between him wanting a scratch and him trying to take a shot at someone, since he does both.

Theo is a complete mushball in a very tough wrapper.  After all of Trainer A and I's work, we've come to the conclusion he is a very insecure horse that will attempt to take charge of any situation he's in because he doesn't trust anyone else to make those decisions.  Once he does trust someone, he's quite content with them taking the lead.  He's very sensitive, both emotionally and to touch, and acts out when he's uncomfortable.  Nobody really expects that from a horse that looks so drafty.  Even I assumed he was just being rude for a long time.  No, he's a princess that feels every little thing going on and doesn't like quite a bit of it.  That includes the emotional states of those around him.  Frustration and Theo is a dangerous mix.  There's a reason he offered to unload me when I rode in a Prince of Wales spur.  There's a reason he will politely tell me to f*** off if I use the whip too sharply or get frustrated.  Little taps and gentle voices, please and thank you.  Kind of explains the old Theo stories with him dumping people and bombing off. 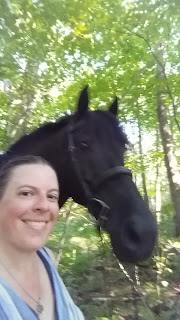 So how does a sensitive princess get a reputation as incredibly dull and a thigh master?  Or, more the question in this case, how did I mistake a sensitive princess for a dead head?  He's learned to tune everything out.  It's self defense for a horse that packs around beginners.  He's lazy enough that he'll ignore a rider and do the bare minimum necessary.  Now that I'm tuning him up, it's a bit of a battle to manage his returning sensitivity.  Shifting my weight shifts him.  I'm back to having to be super aware of how I'm sitting because Theo is now listening closely enough that weighting a seat bone changes the way he's going.  Lazy?  Sure, he prefers eating and not breaking a sweat, but dead head?  Not in the slightest. 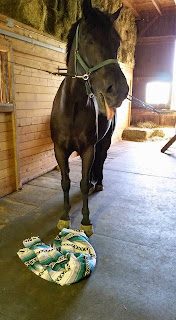 I feel bad that I misinterpreted him for so long.  This is what happens when you go into a partnership with expectations built on what other people tell you or what you think the breed is like.  Big draft cross that goes slow and looks completely disinterested?  Hide like an elephant, better get out the big spurs.  Nicknamed the thigh master?  Better grab a whip, too.  You know how these draft crosses are . . .

Now I get to start changing the litany.  Theo isn't a jackass, a bully, or a jerk.  I can't keep calling him that.  He's a sensitive horse communicating in the only way he can.  Calling him those things will just perpetuate that view in the eyes of others as well as my own, changing the way we handle him and respond to him.  The unconscious mind can't tell the difference between a lie and the truth.  If I call him a sensitive, willing horse that just happens to need time to trust someone, I will believe it and handle him that way.  I can keep working on drawing out this sweet, sensitive, willing horse that just wants hugs and ear rubs and to do a big stretchy trot after his muscles are all nice and warm.
Posted by Catie at 12:44 PM