NQR = not quite right

These are terrifying letters for a lot of riders.  Most horse owners know that nagging feeling that things aren't quite the way they're supposed to be but there's no concrete symptom to point out.  NQR often leads to expensive vet bills trying to track down an issue that never quite becomes acute or resolves.

Theo decided to give me a classic case of this in the past two days.  He has been sticky on his right lead.  His right hind is the weaker of the two, always has been, but he's not usually resistant to pick up the lead.  He will usually pick it up and then just bluge out his left shoulder.  Yesterday and today he didn't want to pick it up at all at the beginning of the ride.

Ugh.  This is what gives me a reputation as a hypochondriac when it comes to my horses.

Today could have just been sass.  He came out kind of frisky (and got waaay over excited by carrot stretches, if you know what I mean), then acted up when asked to get to work, including doing his right lead transitions correctly.  He hasn't tried that scoot away from the door maneuver in months.  A bit of lateral work and he went back to picking it up peacefully, but two times is the start of a trend.

The lateral work makes me think it's not his hock but up higher.  Stretch him out and it becomes a non-issue.  No heat, no swelling, recently shod, so no clues there.  His movement is symmetrical, though he tends to be a smidge shorter with the right hind.  No hitch or change in rhythm.  He may just need a visit from the chiropractor.

On the flip side, Trainer A hopped on for a minute when we both realized she's never sat in my saddle.  Yes, she loves my saddle.  So long as she was up there, she put him through his paces a bit.  She liked what she felt and he was very good for her.  She particularly liked where his contact has ended up.  He used to be so heavy my shoulders would shake, now he's perfectly manageable even on my bad shoulder.  I watched him canter in both directions and he looked great, perfectly comfortable, and gave her just a bit of confusion on leads. We'd just done counter canter, so he wasn't sure which he should offer.  We're working on it.

It could be so many things.  Being tight, resistant, and distracted is pretty par for winter riding.  It just bugs me when I can feel that something is up, but it's not something I can find or point out to anyone.

I'm going to end up wrapping him up in bubble wrap, too. 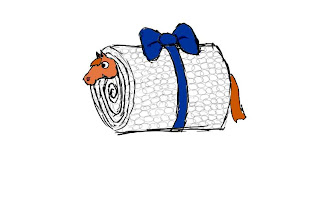